The Providence Phoenix was a Providence alternative newspaper that’s now defunct. It was in what I’d call the “alternative lite” category, definitely having some stuff you wouldn’t see in a more “official” newspaper like the Providence Journal, but also non-offensive enough to be in most businesses around town. To be honest, I think it was a pretty good representation of Providence as a whole.

I wouldn’t say I ever intentionally really read it, but on more than a few occasions I would be waiting somewhere or getting a quick slice of pizza alone (shoutout to Fellini’s for keeping my arteries clogged), and just pick up a copy (it was free) to see what was going on around town.

Anyway, one of these times, when I was very new to Providence, I opened it up and found the “nifty fifty” — 50 things you “have to” do before you leave RI. Or, the sub-headline of it: “Here’s the essence of Rhode Island” (remember this line in a bit). Seeing that I’m soon leaving RI (…and currently have only one blog post), I thought I’d write a mini review of both the list and the places on it. 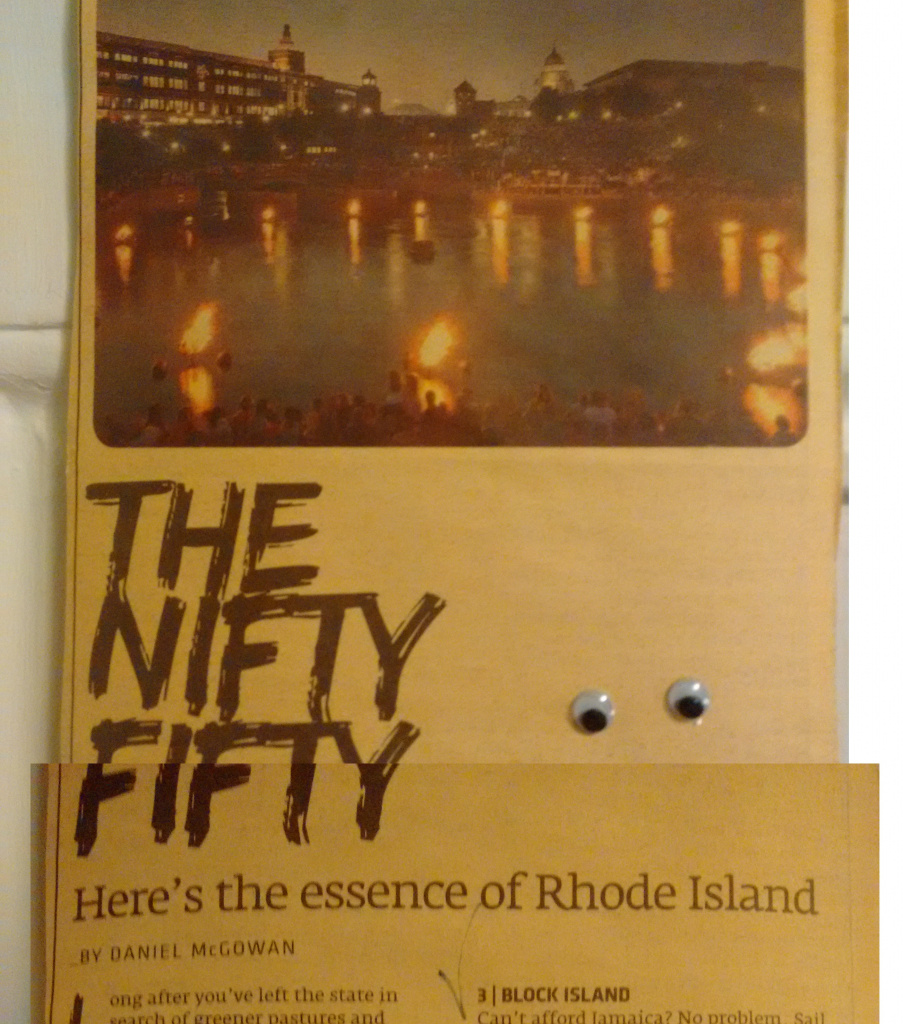 So, about the list itself. First, it’s not meant to be entirely serious. As you’ll see, several of the entries are jokes. To be honest, I’d rather have another cool RI thing I could check out than a kind of lame joke that will quickly be a dated cultural reference no one will get (I’m looking at you, number 13), but… this brings me to my second point. There’s a decent chance they have the jokes for the same reason they have a few entries that aren’t actually in RI or are just kind of generic things that could really be connected to anywhere else: they started running out of them. As much as I’ve waxed poetic about the simple joys of RI life, it really is a small and quiet place for the most part and 50 is actually a bigger number than you might think. So I suspect they bit off a bit more than they could chew and had to add a bit of fluff.

Therefore, there are a few entries that my friends and I did where… it just didn’t seem especially like the “essence of RI”. For example, it would be a restaurant or business that native RI/PVD’ers I talked to hadn’t really heard of, making me wonder if they got some sort of kickback for including certain businesses in their list, which, funnily enough, would be very much the essence of RI…maybe that was a hidden message we were supposed to get??!?

Anyway, here we go. Below is an image stitched together (beware, about 15MB) from the very old, yellowed newspaper clipping (it’s about 4 feet long), and below that, my quick review of each thing. I’ll write most of it in black font, assuming I’ve done them, in red if I haven’t, and in green if it’s a thing that’s not really possible to do.

So tallying it up, as of 8/1/2017, there are 20 I haven’t done that I realistically can (yikes!), 7 that I’m chalking up to jokes/can’t do, and 23 I have done. There are some that would be pretty easy to do if I ever end up in that part of RI (Narragansett for a while, I don’t go to often), but those once a year ones are killing me.

I’ll update this as I do more!

Manual ACKing with the nRF24L01