This is my first boat. It’s pretty silly, but was a lot of fun to make.

During the summer before my senior year of undergrad, I was staying at college and doing research on dilute gas simulations using Monte Carlo methods. My roommates and I had rented an apartment for the year (haha, holy hell…Worcester apartments are a special kind of grimy) and the lease started at the beginning of the summer. My roommates hadn’t moved in yet though, so I had the whole house to myself.

I…honestly don’t remember why, but I decided to build a boat. There were a few small lakes and reservoirs near Clark (University, my undergrad school) but I’m not sure I even had one specific one in mind. I had a lot of time, and the space in my house to build it in, so why not?

Here’s a shot of the start of it in that old apartment (on a bedframe, as all great boats begin): 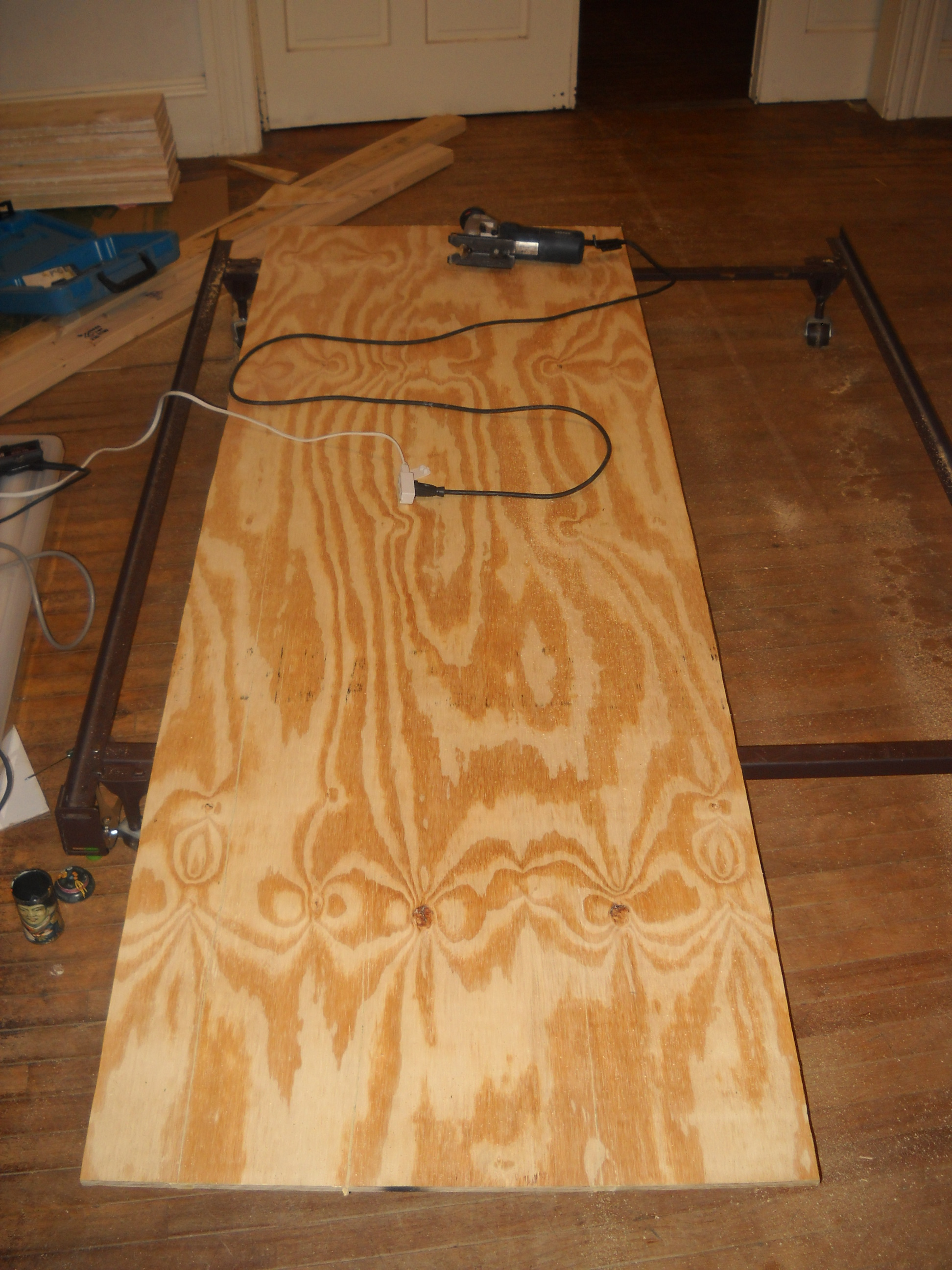 (keep in mind that this was seven years ago at this point, so I’m trying best to remember.)

I searched for some plans online (I think..?) and went with the first ones I found. I definitely wasn’t very selective about it, and found some pdf on a boat building forum online. In case you don’t know, the online boat building community definitely has a type: old, retired, relatively well-to-do white guys. This is their hobby, and if there’s one thing they have in spades, it’s spare time. Overall they were really friendly and helpful. They definitely had funny habits though, like being the small remaining contingent of people who would order supplies over the phone from some other old boat guy they knew, which I thought was kind of funny because by this point I was already ordering everything online for far cheaper.

Anyway, one big mistake I remember making was, the plans called for (I believe) quarter inch plywood. It was a small boat really only meant for one person, so in retrospect it was reasonable. But at the time I thought…”no, that can’t be right. This must be a typo, or I definitely know better than these guys for whom it’s their main pursuit in life.”

aaaaaand, so, instead I bought (I believe) three quarter inch plywood.

Now, this might not have been a huge deal, just slightly more expensive and much more heavy (basically 3x the weight), but the construction of this boat required bending the sides from the bow (so fancy right?) to the stern (holy crap fancy). With quarter inch plywood, you would literally just bend it and screw it. But when I tried it with the three quarter inch, it was definitely going to splinter and crack.

So, instead of doing the intelligent thing and just buying the right wood, I did the briefest bit of reading and decided to try bending the wood by “steaming” it. Now, steam bending wood to make it briefly more flexible, bending it, and letting it set in a specific shape, is actually a really standard technique. However, when they do it, it’s put in a kind of “steam chamber” (IIRC) that doesn’t actually wet the wood too much. I…did not have one of those lying around, so I did the closest thing a dumb college me could do with stuff I happened to have in my house at the time. I wrapped the board in towels (to retain heat and the water itself), rested the board on two milkcrates by its ends, put weights in the middle, and poured boiling water over the towels. Behold: 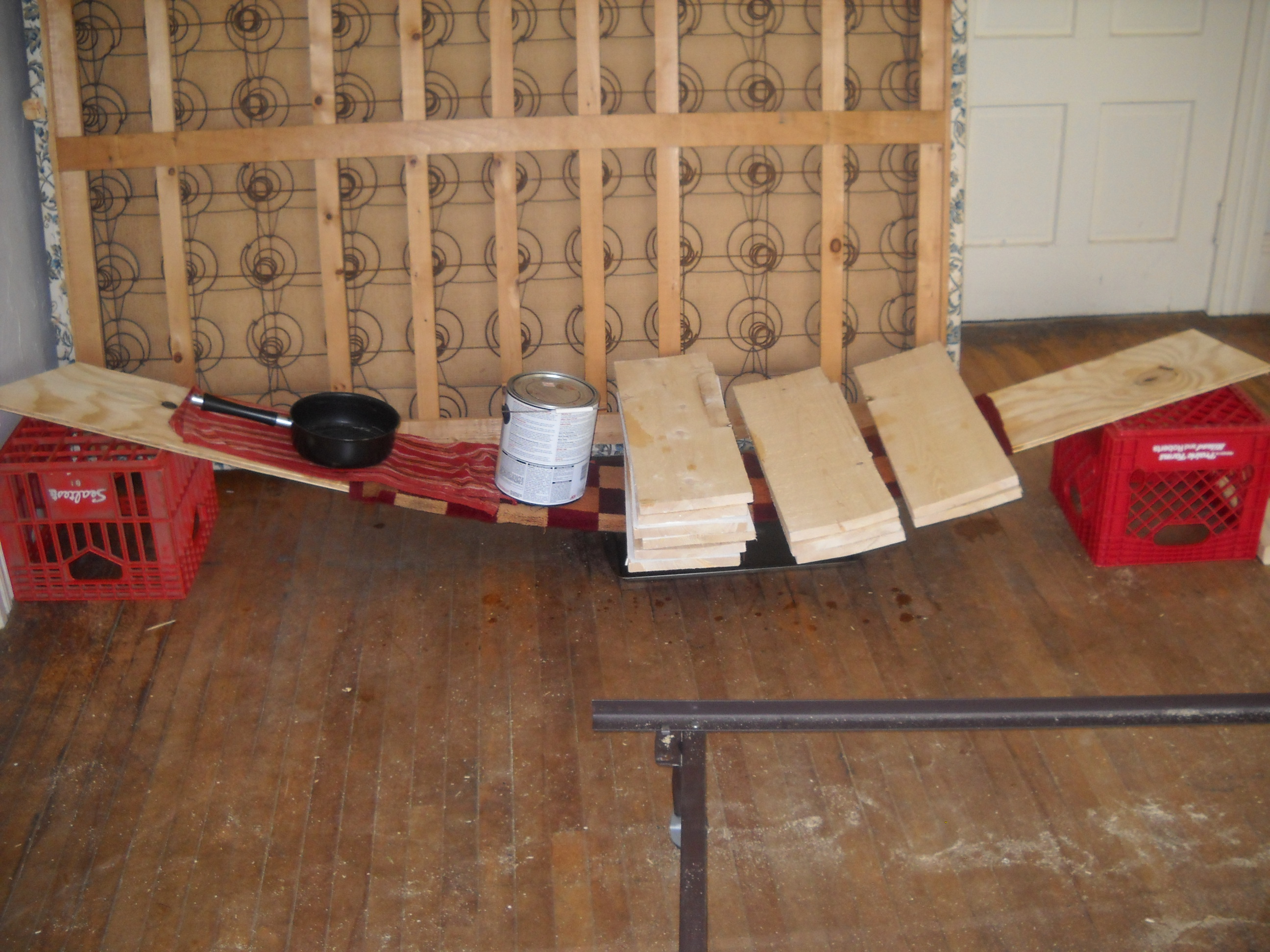 And… all self deprecating talk aside, it actually worked pretty well for bending the wood! Take a look at how it looked the next day or so. 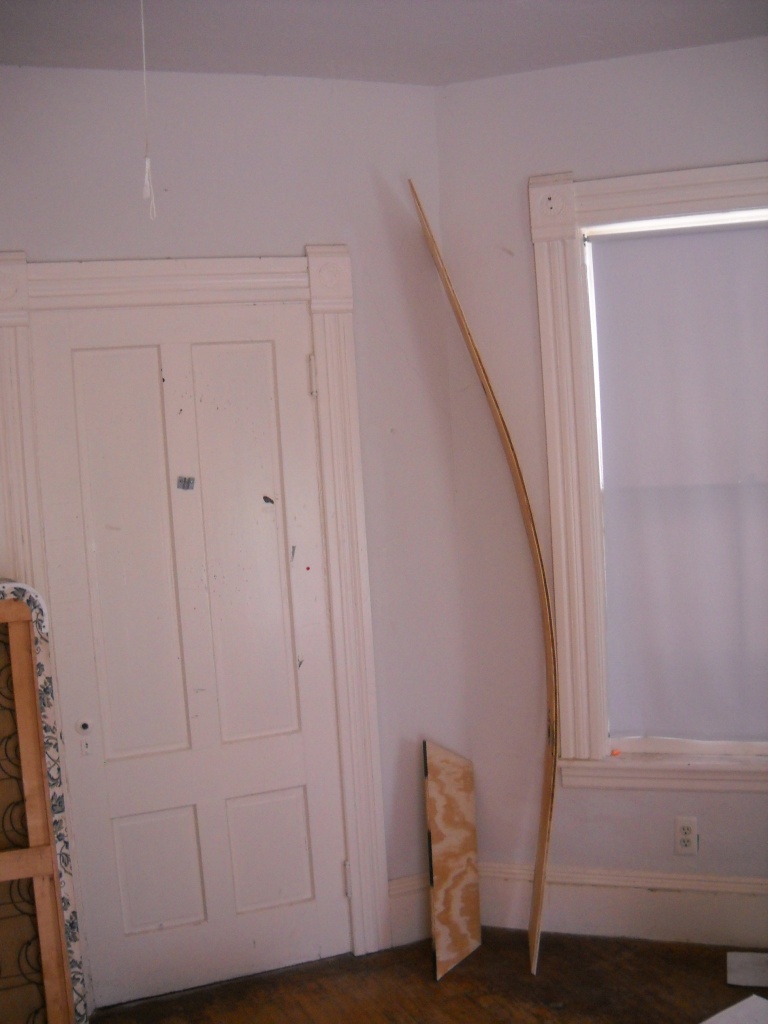 Keep in mind that this is now it’s kind of “new equilibrium”, as in, the shape it has when no force is applied. So, you can actually now bend it even more by applying force when you attach it, as you’re supposed to.

So, this technique (“technique”) worked (“worked”), but I should say something briefly. A lot of the things you’ll read about making boats (or maybe anything, really) are things that are the best option. Especially for boats, it’s the building method that will make them last a really long time, maybe decades. So, my bootleg method for bending wood “worked”, and I never actually met any consequences of it, but there’s a pretty solid chance that what I did would cause it to rot within maybe a few years and eventually start falling apart. So my point is, “worked” is all relative here.

Here it is, beginning the actual construction: 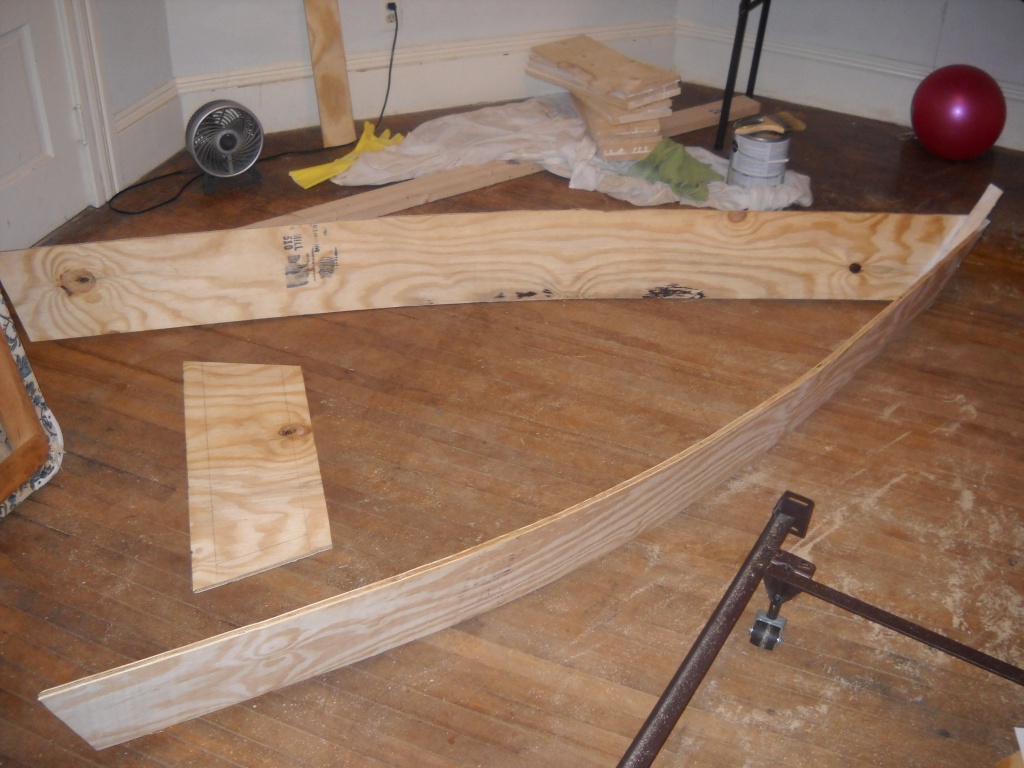 Finally, assembled, standing up, and painted with the primer: 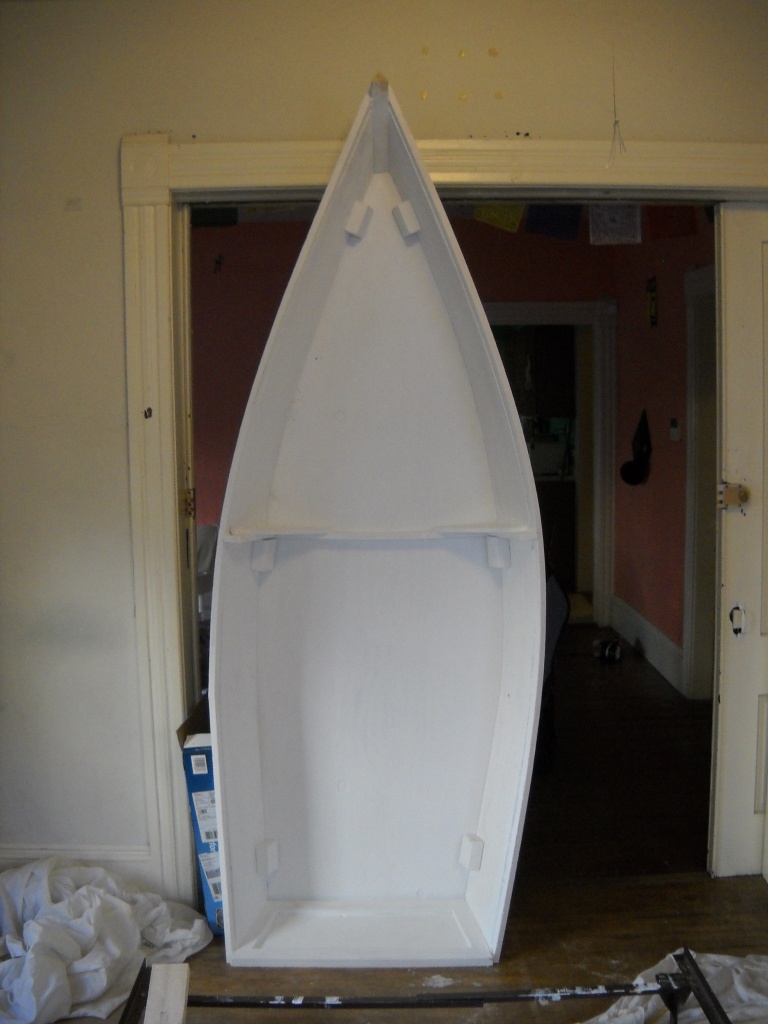 As you can see, the way it’s all held together is by screwing from the sides into little nubs of 2×4. This…again, “works”, but isn’t the best. You can only get, what, 2 or 3 screws from each side into each nub, and all those screws are going into the same volume, introducing a lot of stress. There’s a high chance of the nubs splitting either as you’re making it, or just some time in the future. Additionally, it means the big structural parts of the boat are really only being held together by about 6 points. Again, it actually all turned out fine while I used it, but for long term use it might not turn out so good.

The nubs kept it together, but to make it watertight, I used caulk to seal the gaps, inside and out. I’ve heard this method called “screw and glue”. 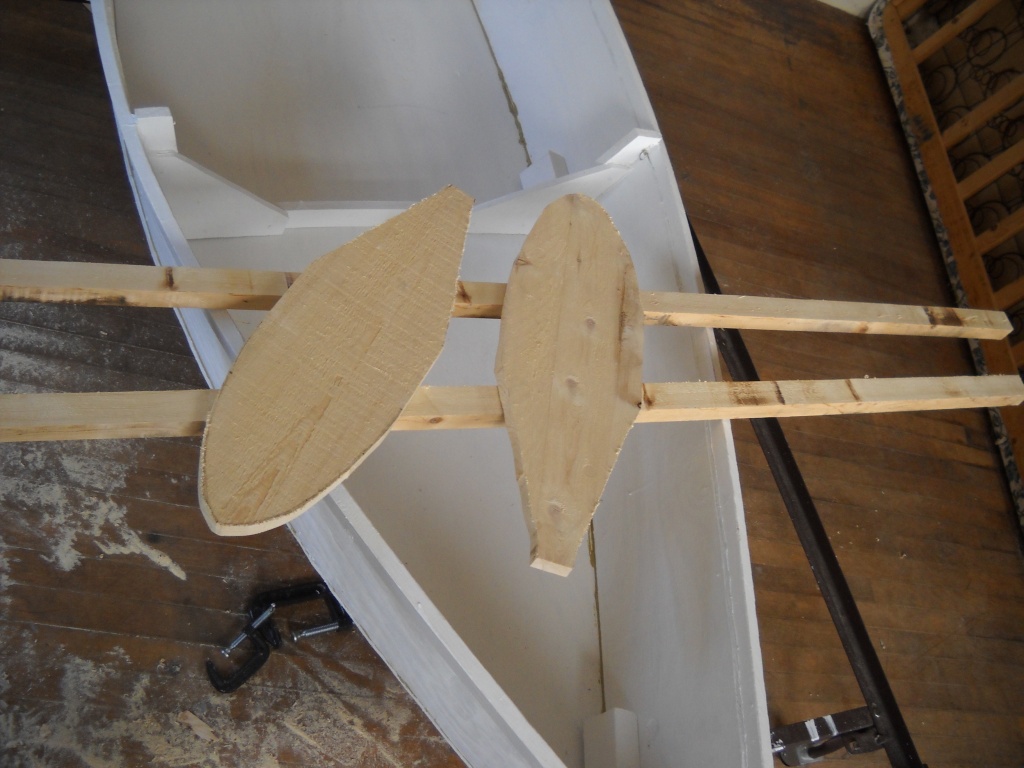 Also made a pretty quick pair of oars that actually worked out pretty decently!

Here it is outside, beginning the paint job (check out that pile of garbage that our delightful Worcester landlord was fine coexisting peacefully with): 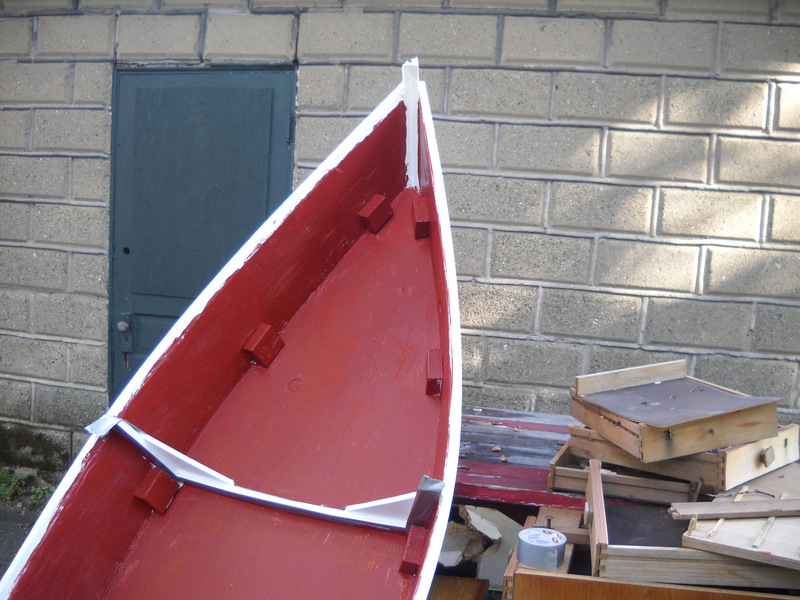 So… for some reason, it didn’t register to me when I chose the colors red and green that they’d be kind of christmas-y. Oops.

Also, why the hell didn’t I do a second coat of paint?? Uuugghhh. 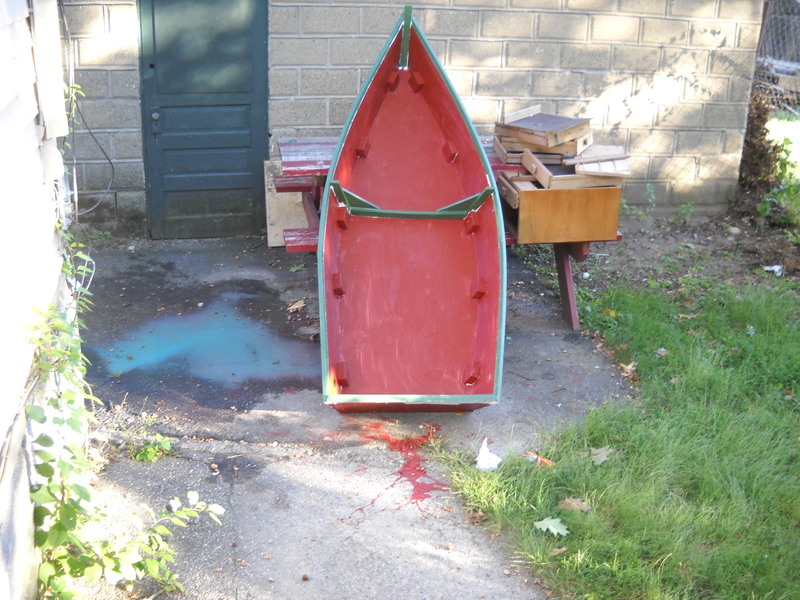 Finally, the big day! It’s debut trip. We broke a bottle of diet Faygo over the bow (just kidding, that probably would’ve destroyed the boat) and took it out on a nearby reservoir I loved: 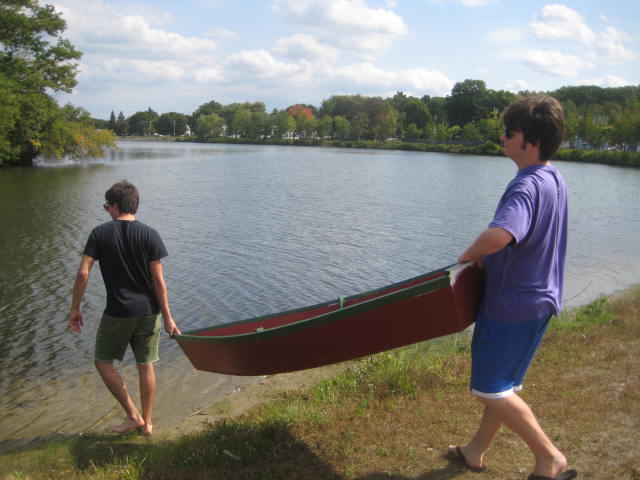 Just me, to start: 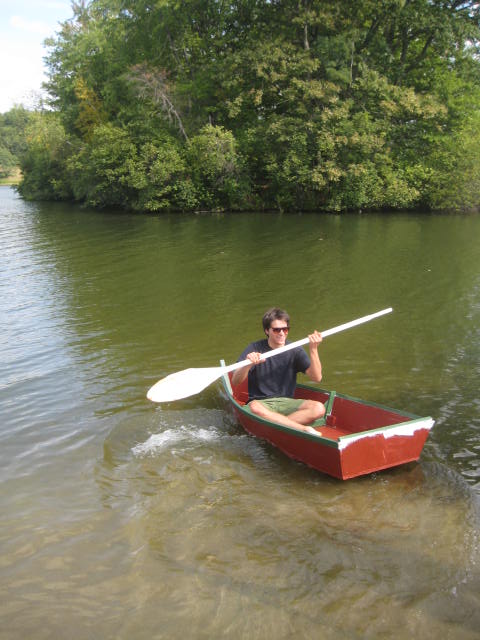 (why the HELL didn’t I finish painting the back??)

And then, my friend and I: 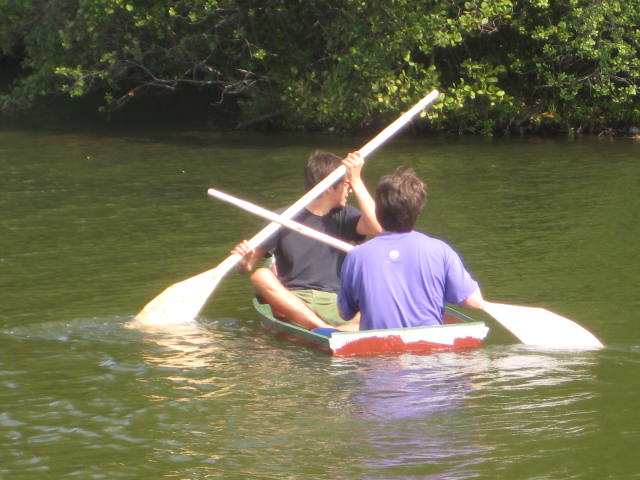 So… this boat was definitely only meant for one person, both in terms of space and weight. You can see that there’s a healthy 2″ of draft…

I’ve always thought this picture was hilarious, when we were finally out in the middle. What if we capsized and died?? 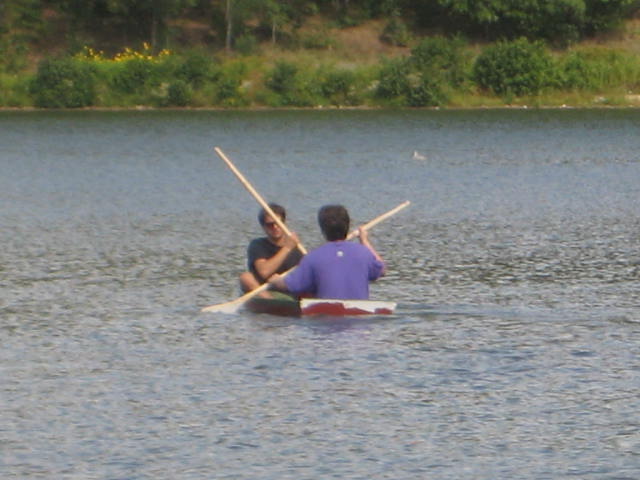 On second glance, it probably wouldn’t have been a big deal. Hmm. 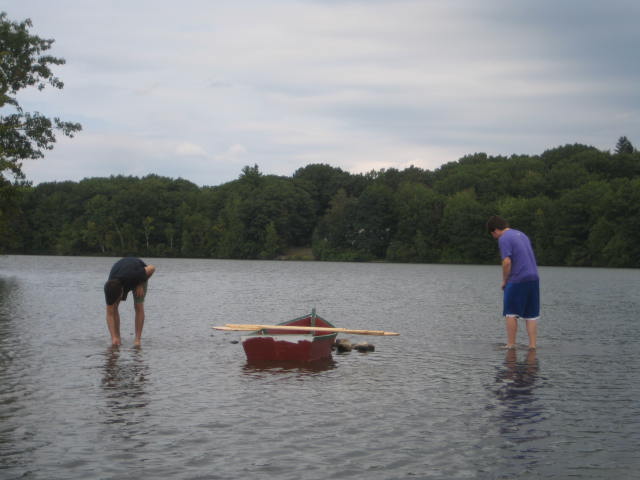 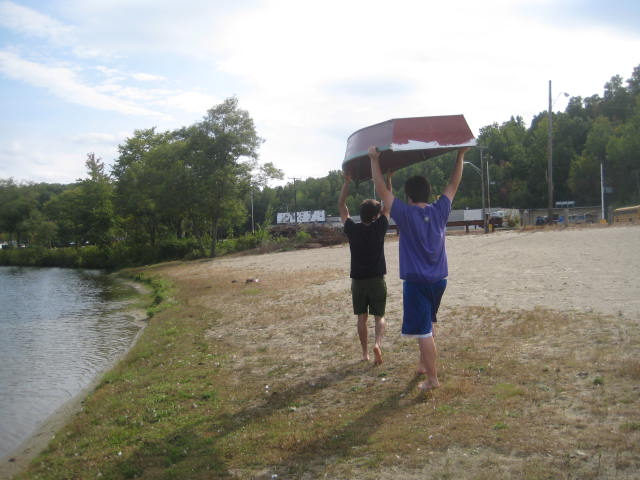 This boat was a great time and definitely got me a little into boatmaking. Not to say I’ve pursued it seriously, but I’ve made a few since then and it’s always a good time. It’s pretty fun being out on the water on something you made yourself. It definitely inspired the next boat (a lot nicer, and I’ll write it up sometime!) I made, with the same friend in the pics above.

I sold this boat when I graduated, to an acquaintance around Clark. I wasn’t really close enough with him to keep in touch, so I don’t know where it is now. I like to think that, given what I know of Worcester, when he moved out, he left it in his backyard, and it’s still in some backyard on Florence St… Maybe I’ll go find it someday.

A little catchup: the slow boat and beginning of Luang Prabang