A bit of background: our lab is kind of ancient. It’s also enormous; my advisor owns most of our hallway. The group was once very big (one of those 20-30 people powerhouses), but these days it’s fairly small (~6, plus a couple undergrads at any given time). However, we still have all the space from those massive days of yore, so a lot of the space is… well, let’s just say a lot of the lab space hasn’t been touched in a while. I mean, every room is still used, but there are definitely nooks and crannies that, if owned by a lab that had to be more economical with its space, wouldn’t remain as untouched as they are when I find them.

I poke around a lot. Often, actively searching for various equipment, but also just because I like to know where things are and explore. More than a few times, I’ve poked into some dusty cabinet and actually found fairly useful equipment that I’ve then used. A lot of physics/engineering equipment from 80s is still pretty useful today.

Also, more than occasionally, I find something that’s a total relic to the point where I actually don’t really know what it is. Tonight, while venting the evaporator (takes ~5min, so I’m usually poking around while waiting), I found these guys: 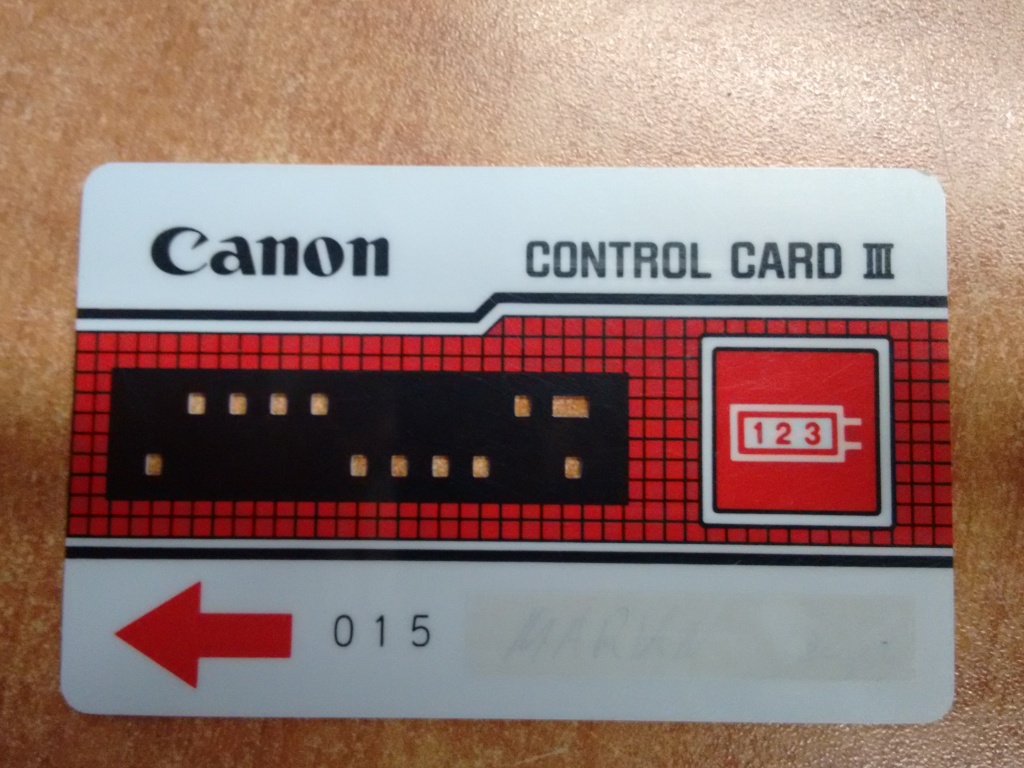 I was immediately drawn in. As you can see, they have holes punched in them. I found them next to some old transparency photos, of carbon nanotubes, I think (I’ll get to that later!), so I assume they were needed for copying them or something. I really love the aesthetic of them; they have that high color contrast look and rigid straight lines and font (minus the Canon word since that’s been their logo for a while) that I associate with the…80s? I’m sure someone who knows more about design than I do could tell me the name of this style.

On the back of the card is a list of notes and such. 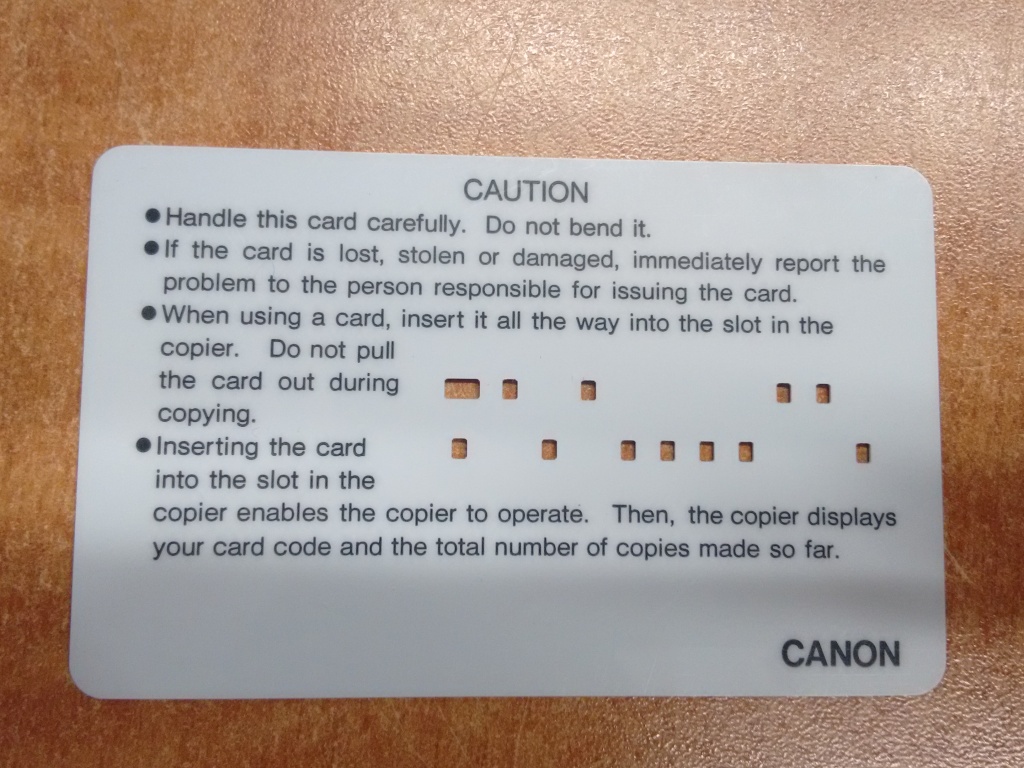 Now let’s look at a few others. Ooh, they have different symbols, and colors!

The yellow one is actually my favorite, both because of the yellow/black/white combo, and also because of the little guy symbol; it really goes with the style of the whole thing. 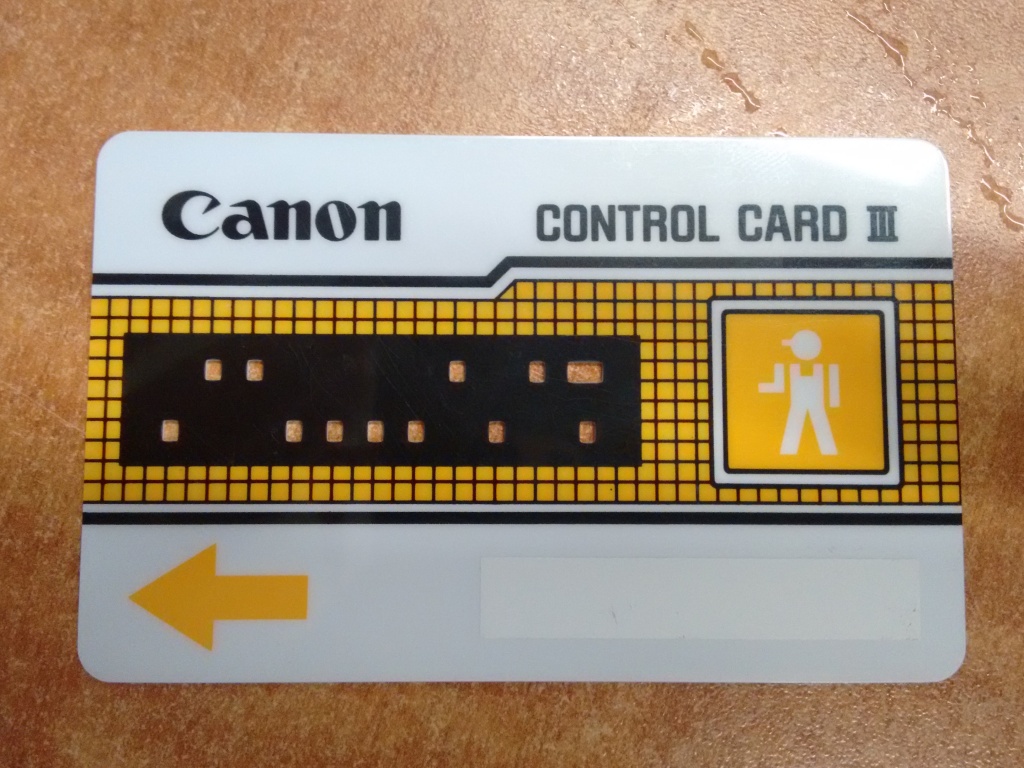 (what’s going on with his head? Is that a nose poking off to the left, or the brim of a hat? Either way, kind of a strange choice to include IMO.) 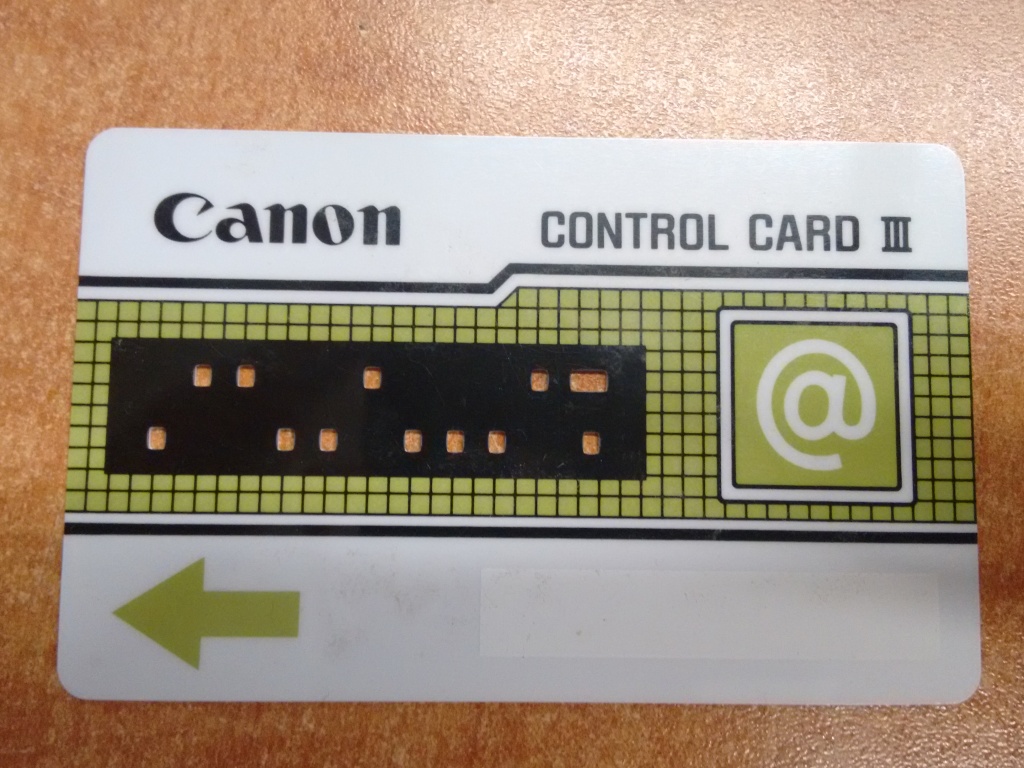 Now, the green ones are a little interesting. The red and yellow ones had the same stuff on the back, despite being different, but the green ones have the name for each one: 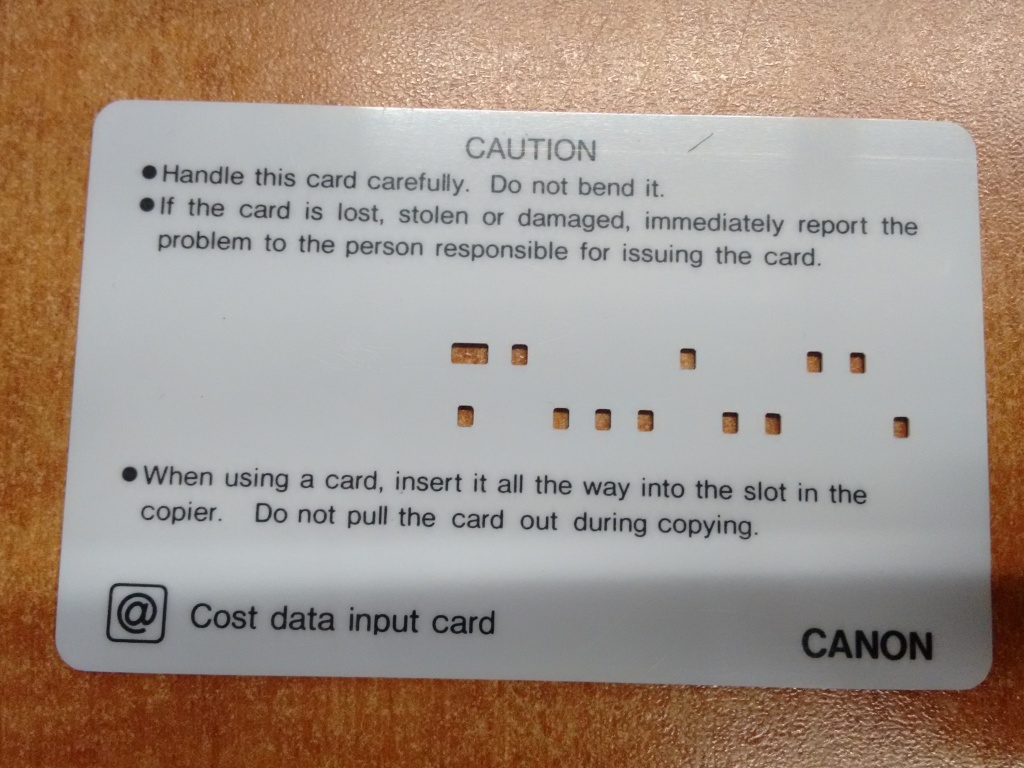 This is kind of interesting to me, because it’s nothing surprising if it you just have to use some card to activate a copier and have it log your info or something, but now that there are multiple kinds, with apparently different functions… now this was kind of a real piece of equipment you had to know how to operate. 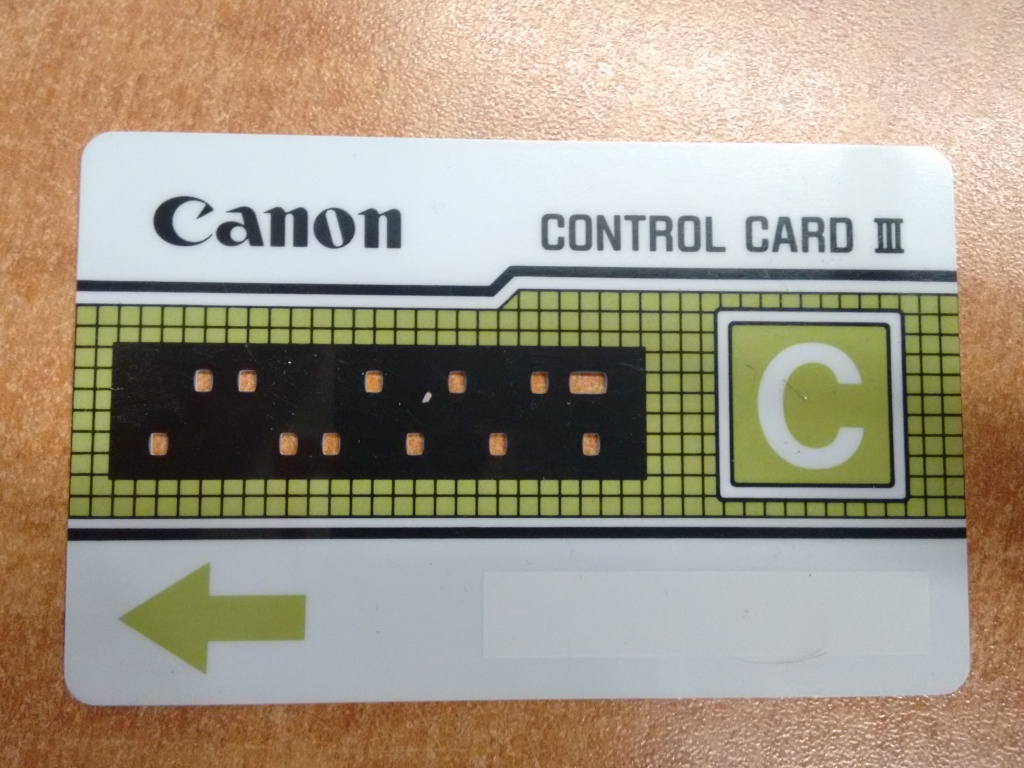 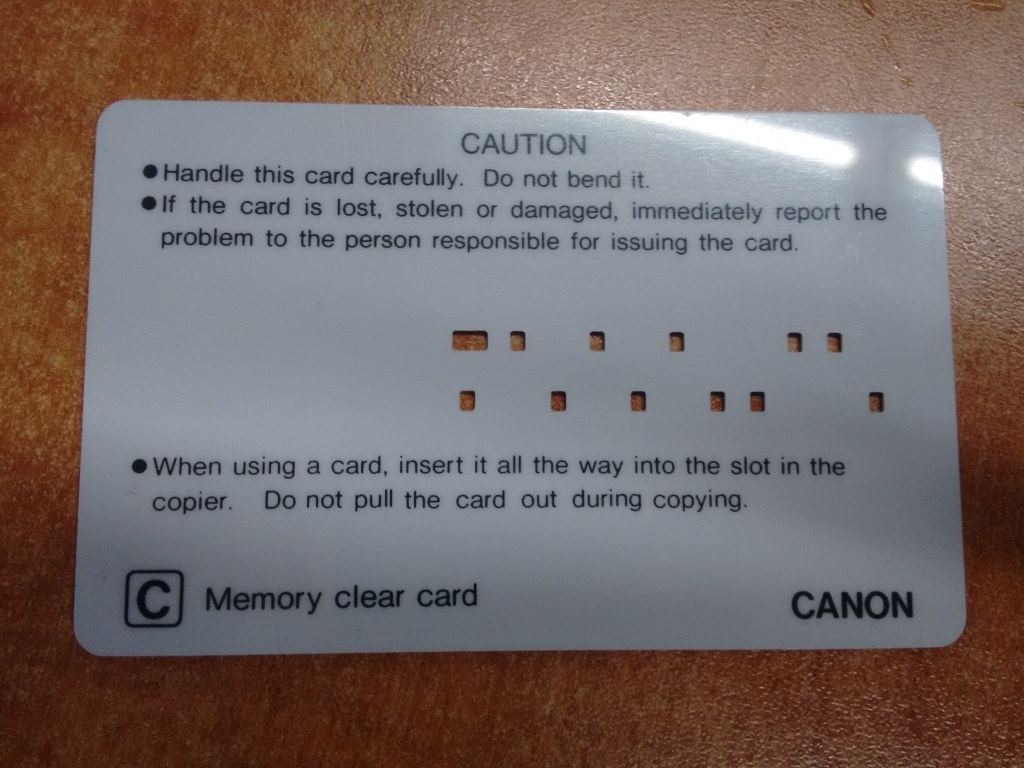 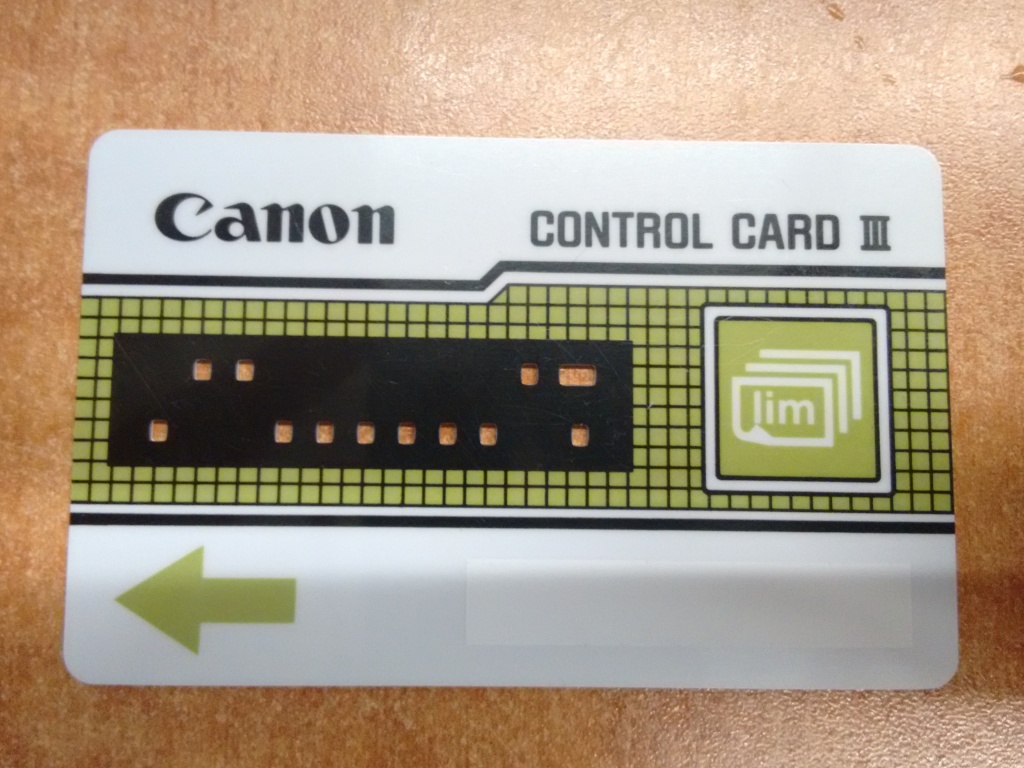 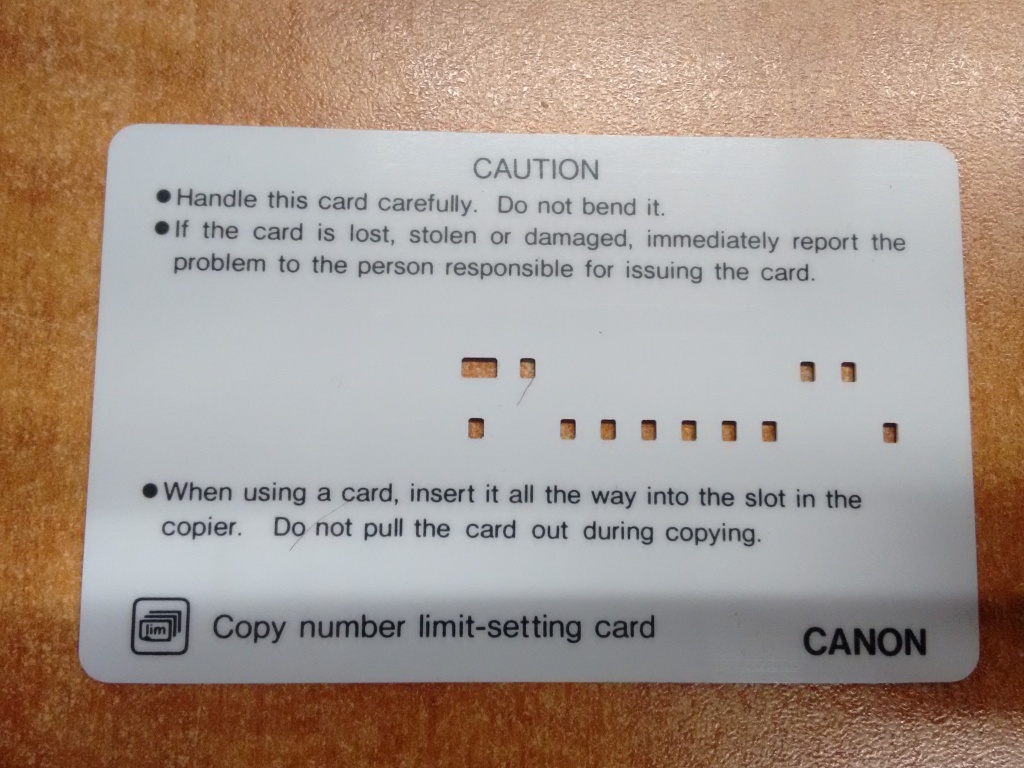 So what was going on here? If I had to guess right now, I’d say that this was a specialized copy machine, probably for photos, that was a communal device. You had to use the different cards to do various things. Now, this is going out on a limb, but it may have been specifically for Scanning Electron Microscope (SEM) or Transmission Electron Microscope (TEM) photos, both because I found them next to some microscope images, and also because I’ve seen older SEMs that actually did their printout to a physical photo. So I imagine that there was probably some process/machinery for when people needed to do various things to the photos.

Having guessed that, let’s try some internet sleuthing. Googling “Canon control card” first leads me to this page, which is apparently a forum for copy machines..? Gosh, they really do have forums for everything. Here’s a screenshot in case it goes down:

As “blackcat4866” (with more than 10,000 posts!) says, he hasn’t seen control cards in ages! But ahh, I also got the name of the machine these cards were for, from this post: the IR5000S. Googling that leads me to what looks like an old Canon webpage, with an image of the machine:

Huh… this actually looks more modern than the beautiful retro monstrosity I was imagining. In fact, the specs on the page mention a “5.1GB hard disk”, so it really can’t be that old at all.

A little more Googlin’ leads me to this wonderful site:

Is there anything less legitimate than a Russian webpage with a strange cartoon dog and cat as its banner? No offense to Russians, but on the internet they tend to be the source of lots of sketchy stuff.

aaaaaand a few posts in, this Evil Plotting Raccoon meme that looks extra sinister with Russian over it: 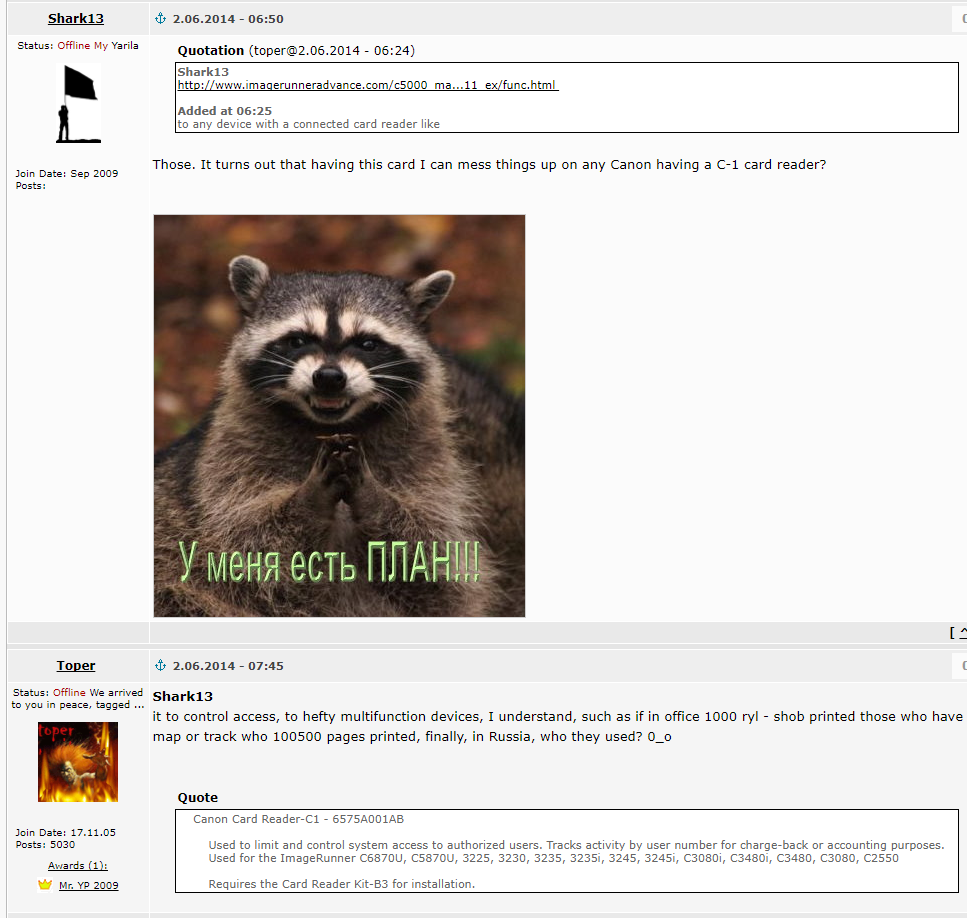 (it seems all it good fun, though.)

Despite this bizarre site, I got another clue! It worked with a “C-1 card reader”.  Googling this leads me to this manual page for it. Interesting, there were apparently two types of cards: the optical ones with the holes that I have, and a magnetic type. I wonder which was more modern?

And another link, apparently you can buy a printer for them fairly cheap on ebay:

Lastly, this guy apparently has no shortage of them, and is wondering if there’s anything he can do with them: 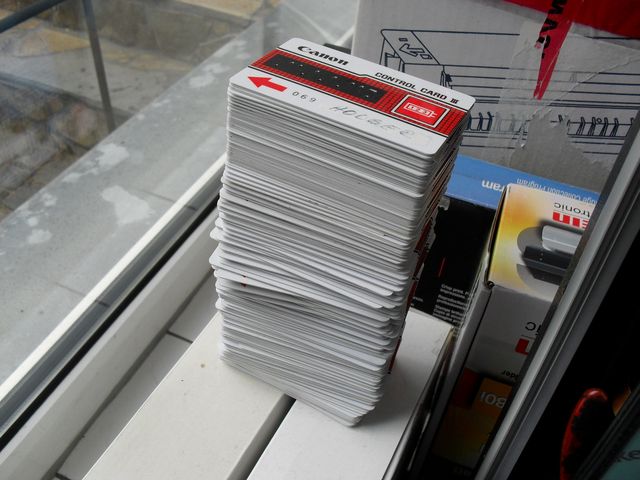 (also, another copy machine website? Just in German?? How many can there be?)

Well, that’s pretty much all. I’m surprised that something that seems this basic was used this recently. On the other hand, this actually doesn’t seem like that bad a design. I’m guessing the way it worked was, it had a small array of lasers corresponding to the positions of each possible hole, and a sensor on the other side, so it had a binary value for each hole/not hole position. Since it seems like there are two rows of 10 each, that’s 2^20 ~ 1,000,000 combos for a single card. Of course, you can probably encode more info in a magnetic stripe, but I’ll say that these cards seem pretty robust, whereas every magnetic swipe card I’ve ever had has worn out on me at really unlucky times. These control cards are older than time itself and they still seem pretty sturdy.

It also makes me appreciate the absolute ease technology gives us. I’ll give an even better example in a future article, but it’s both sad and funny to me how much effort things that are trivial to us now used to take. Of course, with any foresight, I’ve gotta realize that everything I do now will seem torturous to people in the future. They’ll be like, grandpa, you actually had to physically go to the clean room to make samples? Why didn’t you just program the nanofabrication machine complex to do what you wanted?