Hey there, nonexistent reader! You may have (not)iced that I’ve been gone for a while. That’s because I just defended my PhD, and I was pretty balls to the wall busy for the last few months getting ready for that. I made a few posts here and there, but towards the very end I realized I really had no time for a blog that no one reads anyway. Maybe I’ll make a post about the whole before-and-after experience at some point.

Anyway, my friends and I just got back from a weekend trip to the NYC Maker Faire. Max has a friend who got us a few free tickets, which was sweet; they’re not inexpensive, something like $35 for a single day pass I think? So she definitely saved us some buxx. I had never been before. It was pretty perfect weather and in Queens, so all said and done not too crazy to get there.

Here are just some of the topics that we’re looking for:

In other words, fucking anything. Which, I guess, is good on some level; I guess I don’t see a big reason to be more selective than necessary if it would mean eliminating cool stuff, and most of what they have listed there is still related to making stuff.

Maybe one worry is that, if you get truly open ended enough, you can kind of diminish the point of the thing. I’ve seen this happen a little at Renaissance Faires, where instead of being “medieval/renaissance related stuff”, a lot of people take it to mean “anything remotely alternative/nerd culture based”, because the Venn diagram of RenFaire and those people have a lot of overlap. So, I specifically remember last time I went to one seeing things like a Dr Who cosplayer and stuff. I mean… it’s not hurting anyone, but there’s also a specific theme for a reason, right?

Anyway, rambling. The maker faire didn’t seem to be in any danger of that (yet, anyway). My main complaint about it, if I had to make one, is that it’s like thirty billion percent 3D printers. Normally 3D printers are pretty cool IMO. They’re fun to watch, they make cool stuff, and for most people, they’re not everywhere. I have…three friends? with them, and personal access to some at the Brown Design Workshop, and they’re still usually cool to see.

However, at this place, such an insane number of stalls/booths/tables/whatever were 3D printers. My impression was that you mostly do this faire thing if you have something at least a little special to show off. And there definitely were some special things! But, as far as I could tell, most of the 3D printers were literally just another 3D printer, printing random baubles. And lemme tell you: that gets really, really repetitive after like 5 hours of it. At some point I wanted to get a bit more aggressive and just ask each table (albeit politely) “So, what sets your 3D printer apart from the others I’ve seen today?”, partly out of genuine curiosity (because maybe there are some instrumental differences for each I didn’t notice), and partly for amusement.  I mean, from what I could tell, a lot of them were really just Prusa or RepRap or whatever knockoffs, with nearly identical designs.

I’m a little curious what their motivation was. Maybe at home they’re like, “the guy with the 3D printer” so people they know said “you’re a 3D printing whiz, you should really go to the maker faire!” but they’re just another 3D printing dude at the faire. Alternatively, a thing I speculated about to my friends was that, for the ones that are little companies, it’s possible that 3D printing is such a booming market right now that it’s legitimately a good business move to start a 3D printer company with a (open source) knockoff design, just because you’re gonna get some business.

Anyway, despite my kvetching, it was very cool and fun. I saw a tabletop water cutter that started at apparently $4500, which is genuinely not bad for a serious hobbyist, and was cutting decently thick steel. We saw a sweet firebreathing dragon built around an old pickup truck, that we all immediately thought came straight from Burning Man (and the people manning it reaaaally looked like burners (deep playa)). There was an ENORMOUS 3D printer, this style, but about 25′ tall: 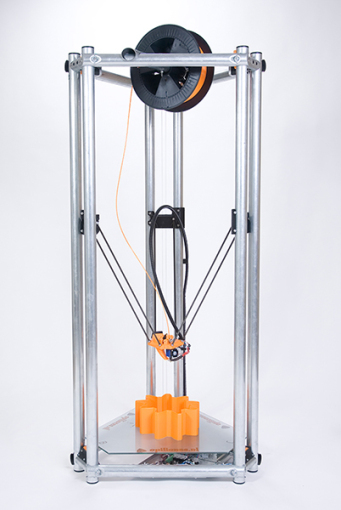 and its extrusion diameter was enormous, maybe 1/8″ or something. There was a “physics bus” that was just a repurposed schoolbus, but had some pretty sweet physics demonstrations in it. Classic stuff for sure, but decently done and clearly tough enough to withstand the force of a thousand rowdy kids running through it.

Oooh, one other thing! Part of the thing was in the “hall of science” or something that’s actually a legit science museum year round. They had these mathematics and optical illusions exhibits (that I think they actually have identical ones of at the Boston Museum of Science, so I suspect the same company contracts them?), that are all pretty cool even if you’ve seen them before. But one I hadn’t seen before was this one called the “Cheshire Cat”. It’s explained here (where they’re selling a cheap handheld version) so I won’t go into much detail, but you basically sit across from your partner, they’re against a white background. Your eyes are “split” so one of them looks forward to your partner, and the other one looks at a white background to your right, through a mirror. Then, you put your hand in between the mirror and white background, and…it wipes away parts of your partner’s face! A lot like this image from that site: 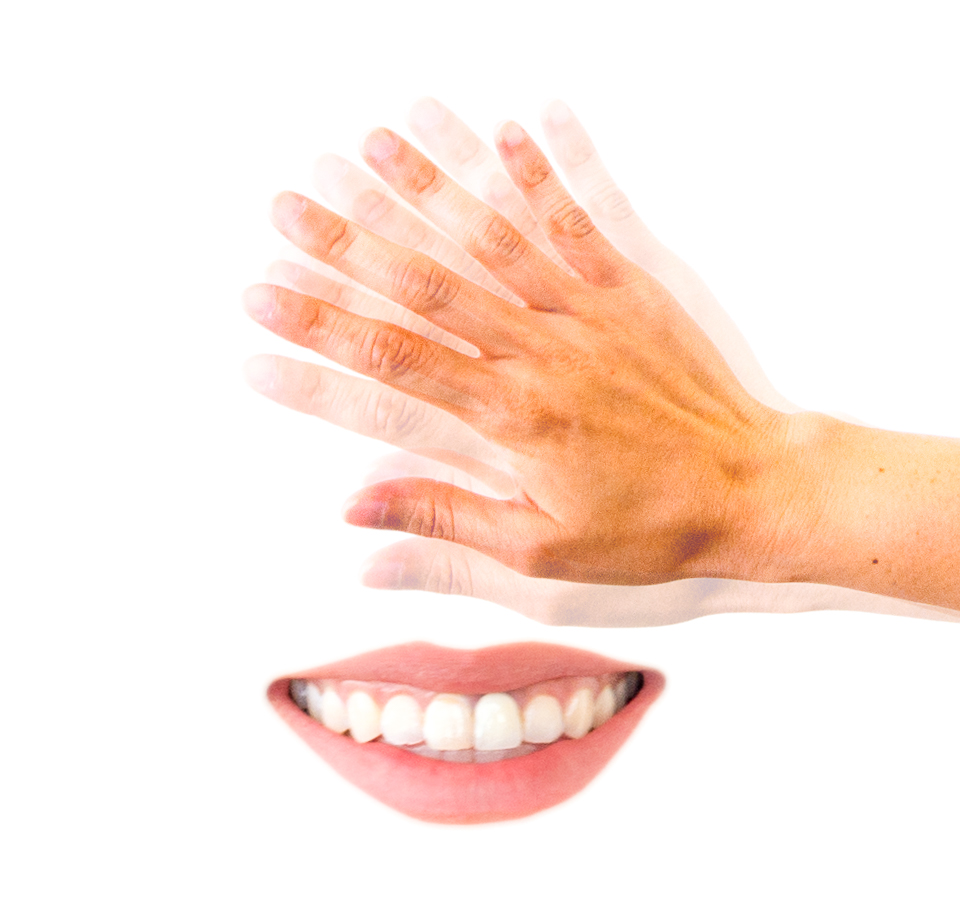 One more interesting thing we saw was this “ONO” 3D resin printer. I was fairly blown away. It’s a resin printer, which works very differently than the most well known “extrusion” types that just squirt out a little string of plastic that sets; resin printers use a certain frequency of light (usually UV) to cure a liquid resin. Because the instrumental thing that’s forming the part is now light (or, the motors controlling the light source, which are very precise too), it can form very high resolution things. Additionally, because of the way it’s doing it, it can make shapes that would be pretty difficult for an extrusion printer (because they have to worry about things like “overhang” and such.

So I knew about these printers previously, but the reason this one was so cool is that the light source was your phone, which is cool for a few reasons. The first is that most resin curing lights use UV, but this resin apparently responds to the visible light from your phone. The other is that the phone is bright enough to cure it. Another is that it’s $100. Most resin printers are really, really expensive, and the models they had demoed were really cool. $100 is less than most crappy extrusion 3D printers cost, so I was pretty tempted to buy one, even though I absolutely don’t need it.

There’s always a but. I was curious about it so I googled around a bit when I got home, and it appears that ONO may have a bit of a dark history. First of all, maybe related to this, apparently their name was “OLO” but is now “ONO” (for which, heh, as you’ll see, the phonetic “oh no” may be very accurate), as you can see on their kickstarter. One of the first things I found googling was this “kickscammed.com” post about how it’s bs and a scam. Heading to the kickstarter comments section, you see some fun ones: 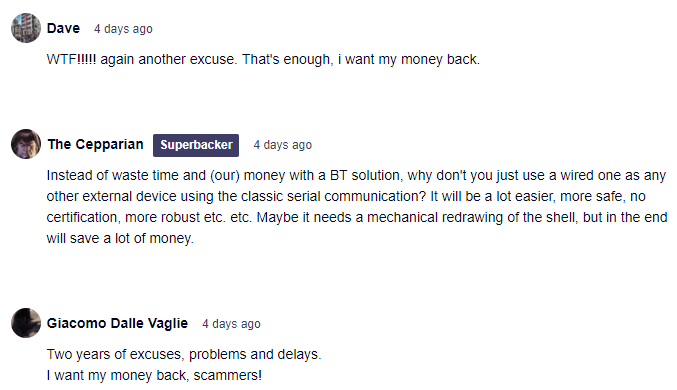 Sigh… well, I guess I’m glad I didn’t buy one (though since backers don’t have them yet, my guess is that I would have been paying for a promise of one in the future). Though, it’s interesting that a lot of the complaints here seem to be complaining about them being hung up on a Bluetooth issue, not some sort of inherent unfeasibility about the project as the kickscammed site was saying. Though, maybe that’s indicative that the company knows this and is just using this as an excuse. So that’s kind of disappointing that the thing I found maybe the coolest was probably just a scam, or at least very unrealistic and not yet real.

Anyway, I gotta go do stuff. Catch ya next time!