Sike, I’m fine. I’m just making fun of Malcolm Gladwell’s clickbait-y style, and in this case, the actual title of one of his sensationalist podcasts, here. To make an unnecessarily long story shorter, in one Revisionist History podcast, Malcolm Gladwell realized that McDonald’s fries aren’t as good now as they were when he was a kid. He went on a quest to figure out why, and apparently it’s cause they used to use beef tallow to fry their fries in, and then the trans-fat scare in the 90s made them have to change to vegetable oil. He talks to some food scientists who explain why they don’t make as good fries (something about the oil permeating the potato?), and eventually makes some with a food scientist at their place.

He then waxes on about how they’re heaven on earth, things aren’t what they used to be, blah blah blah.

Now, don’t get me wrong. I like fries. I’ve had some pretty damn good ones a couple times, but to be honest I’m not that into them usually. Especially fast food ones, which tend to taste pretty cardboard-y to me. So maybe I’d like them a lot more with this silver bullet? Naturally my friends and I had to try them, and made plans to. About a year later, we actually did!

The first thing was figuring out what the hell “beef tallow” is and where to get it. I knew it was basically beef fat, but not exactly what form it was in or how you get it. Apparently, you buy suet, which is raw beef fat, and then render it, which is basically just boiling it till it turns to liquid. We went to the meat shop, where it was about 8 bucks for 4 pounds. Definitely pricier than other fats, but not too bad for a specialty thing.

Here we go! It looked a bit weird like this and had the consistency of wax. We chopped it up roughly and put it in the pot. 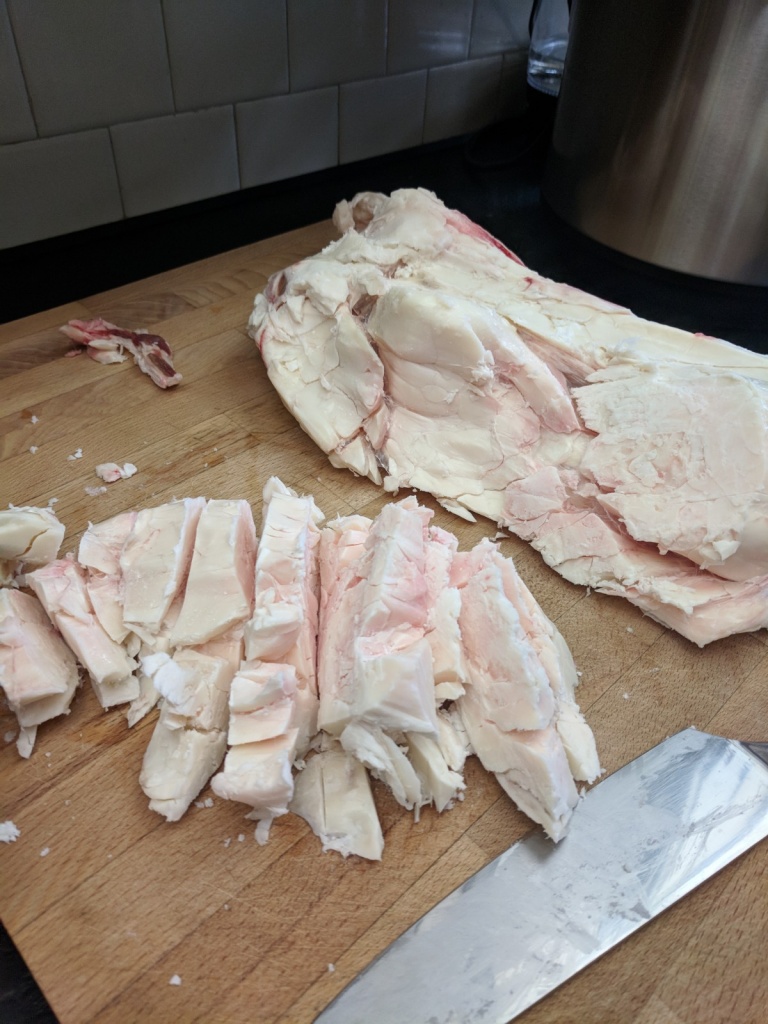 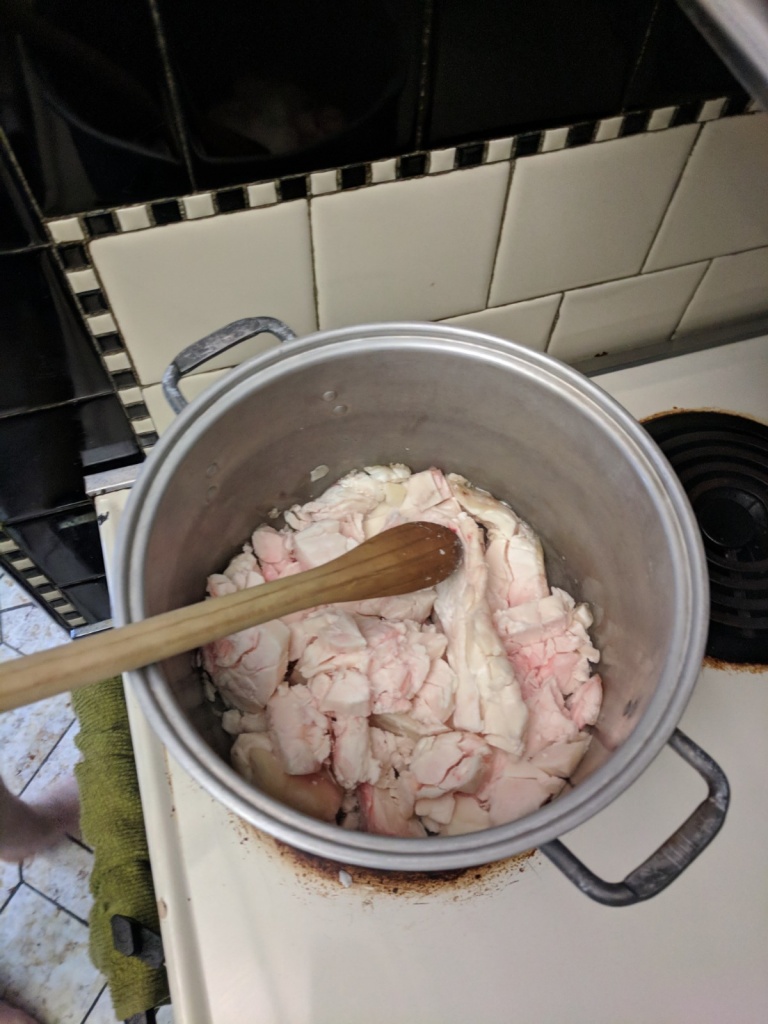 It started getting soft and draining the actual tallow out quickly: 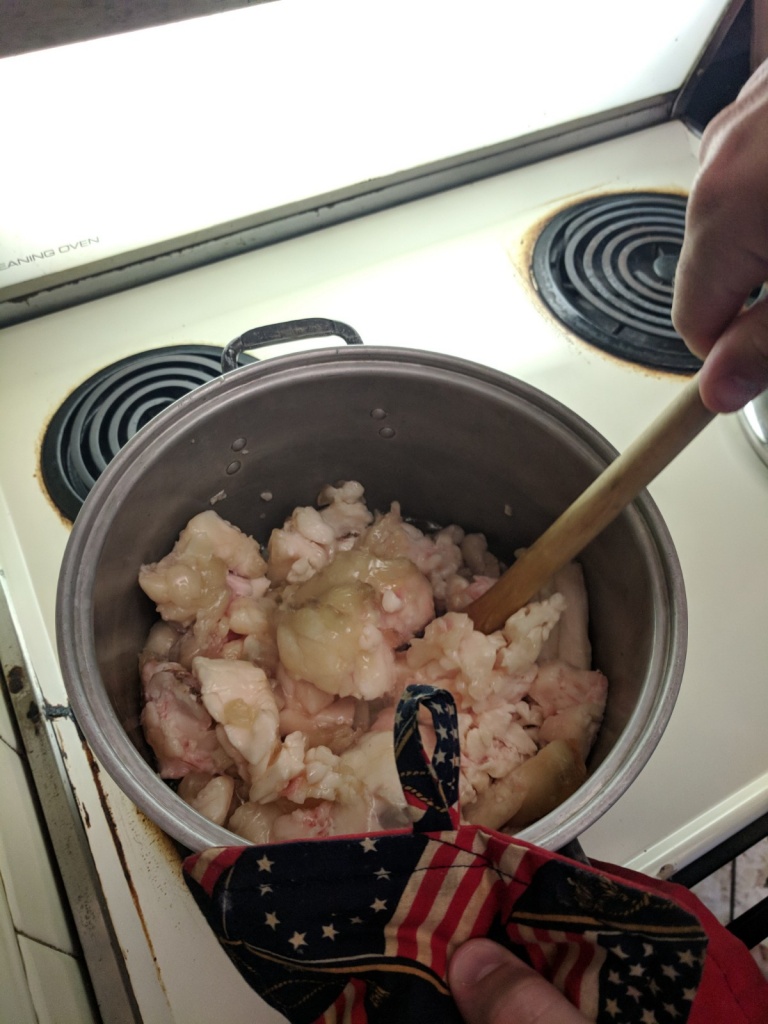 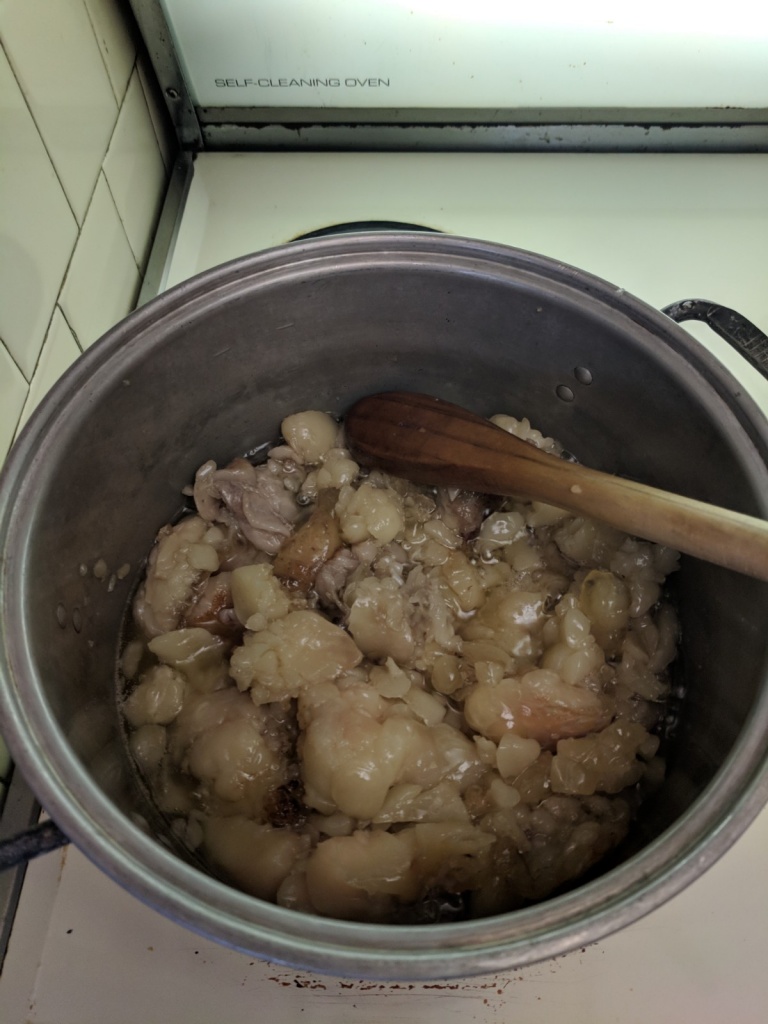 I’m not gonna lie, it smelled… pretty nasty. Unfortunately, it seemed to be taking a while and we were hungry. Other sources online mention rendering over the course of hours (though to be fair they might be doing a lot more than we were) and we were hungry, so we scooped out the bigger chunks that hadn’t melted yet and blended them in the food processor and put them back. This was pretty gross but definitely sped the process up a ton. When it looked about good, we scooped out the pulpy stuff with a fine strainer: 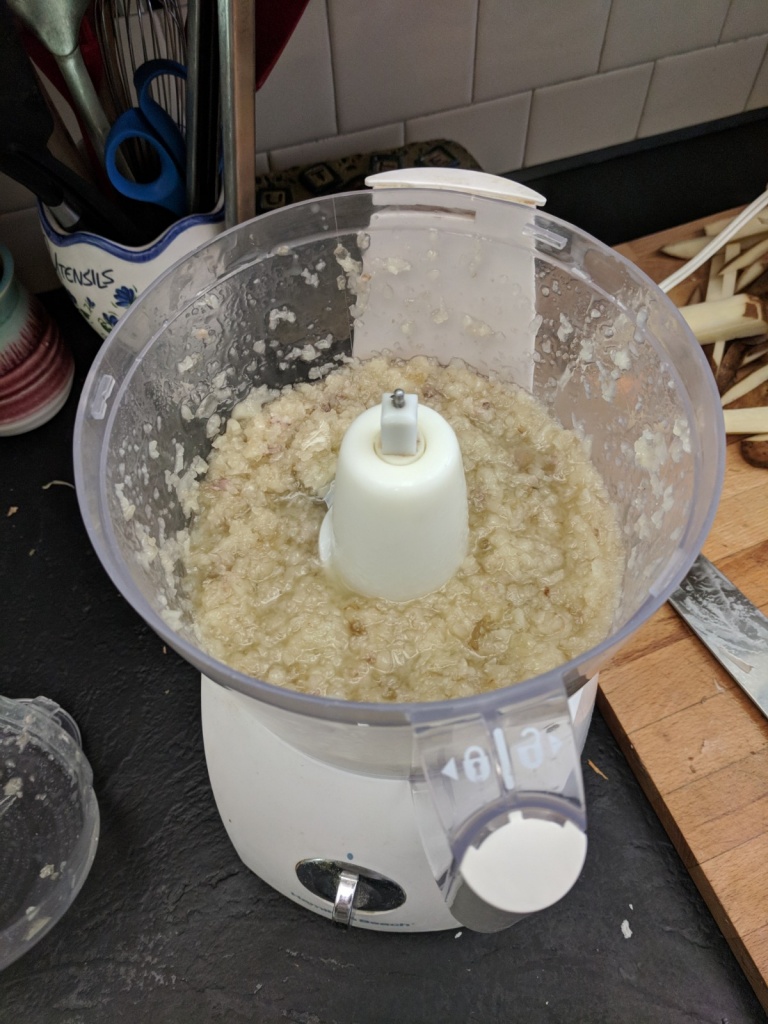 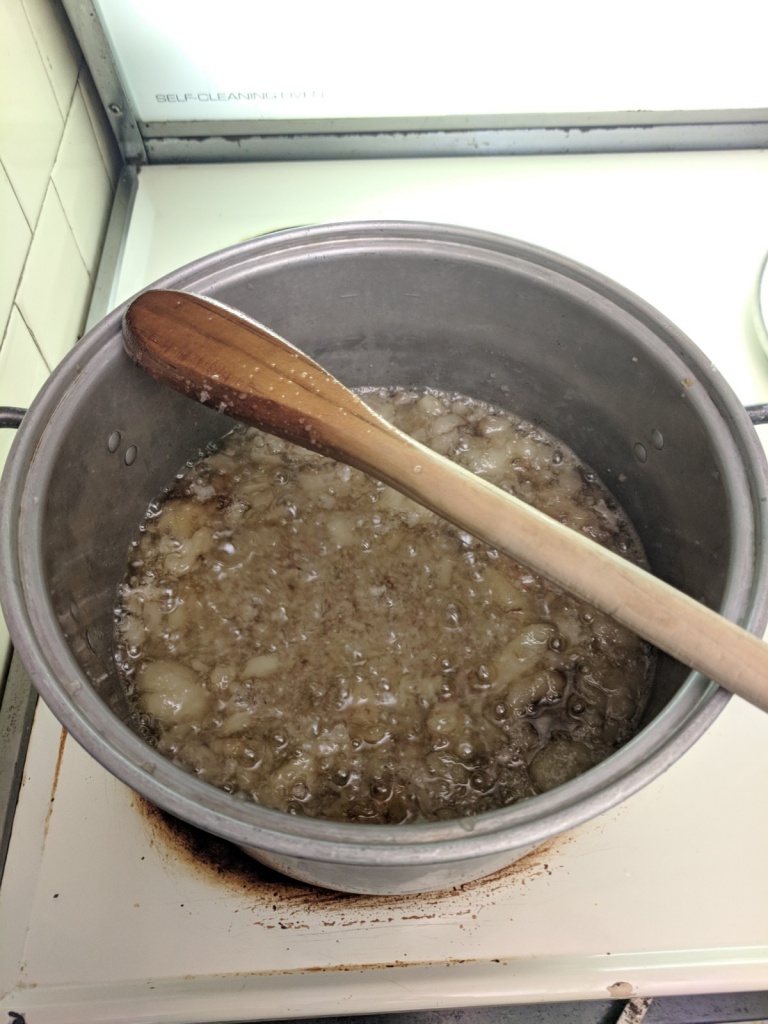 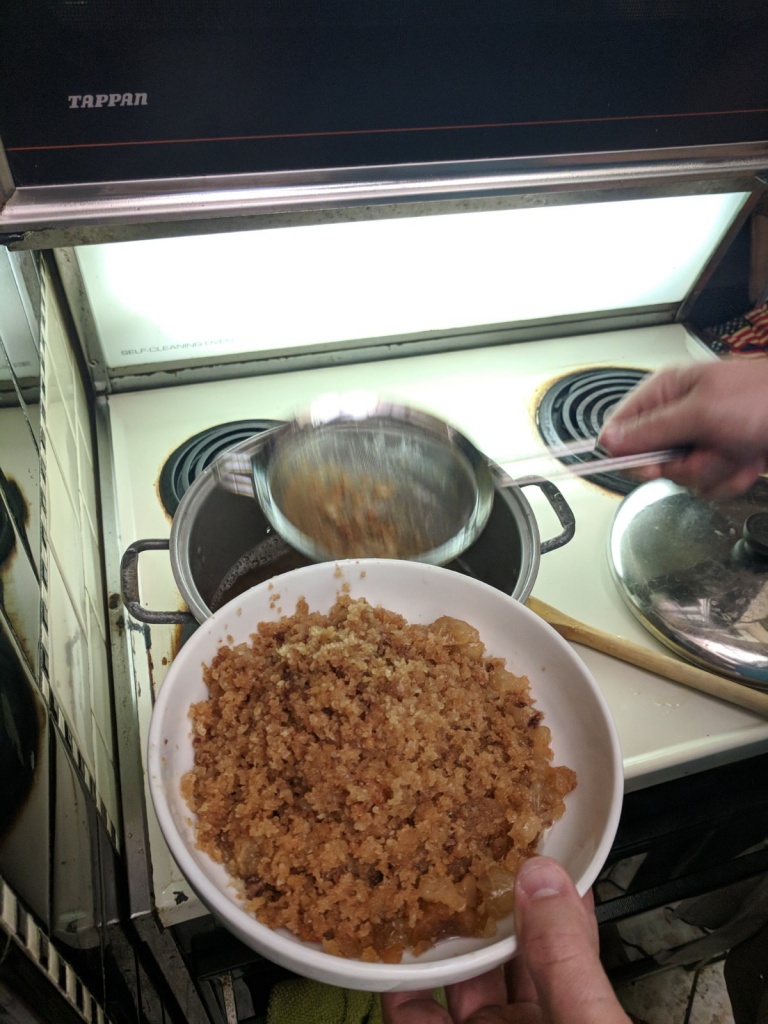 Now for the potatoes! We got some classic russets and some sweet potatoes for good measure. We also tried a few variants. My friends read online that one method is to soak the slices in sugar water, and another method, to soak in a vinegar mixture. We also did a vegetable oil batch to be a control. 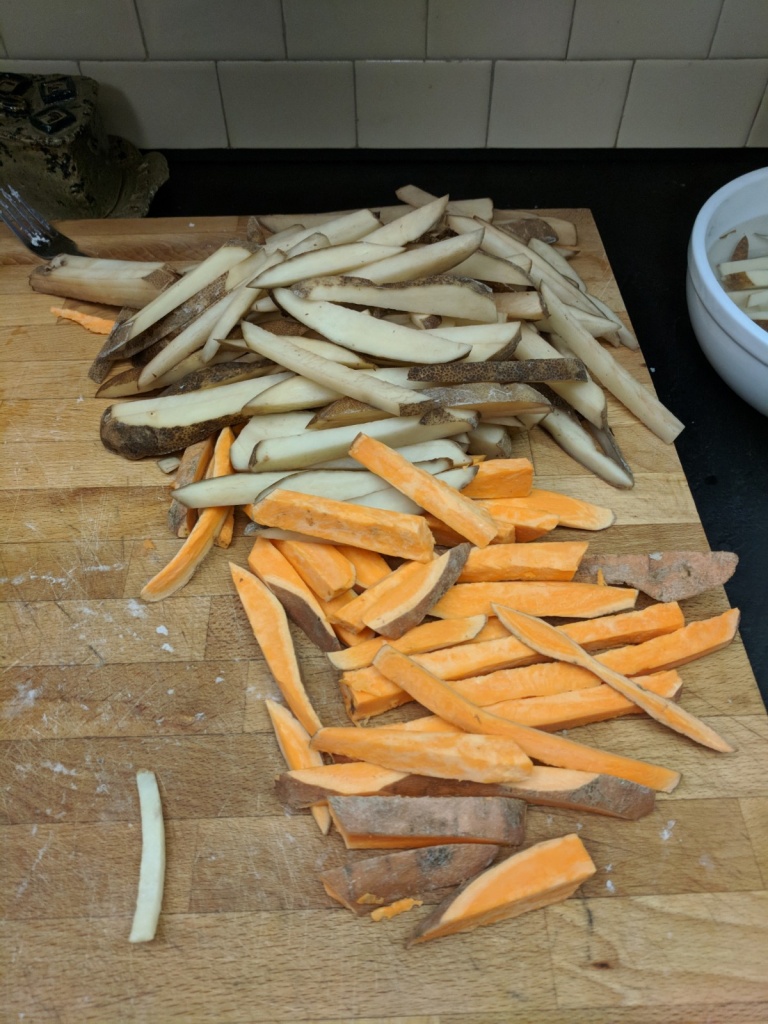 We read somewhere that you want the oil to be at about 375 F. We threw them in and it bubbled and spat like crazy, but didn’t start a grease fire! That’s always good. 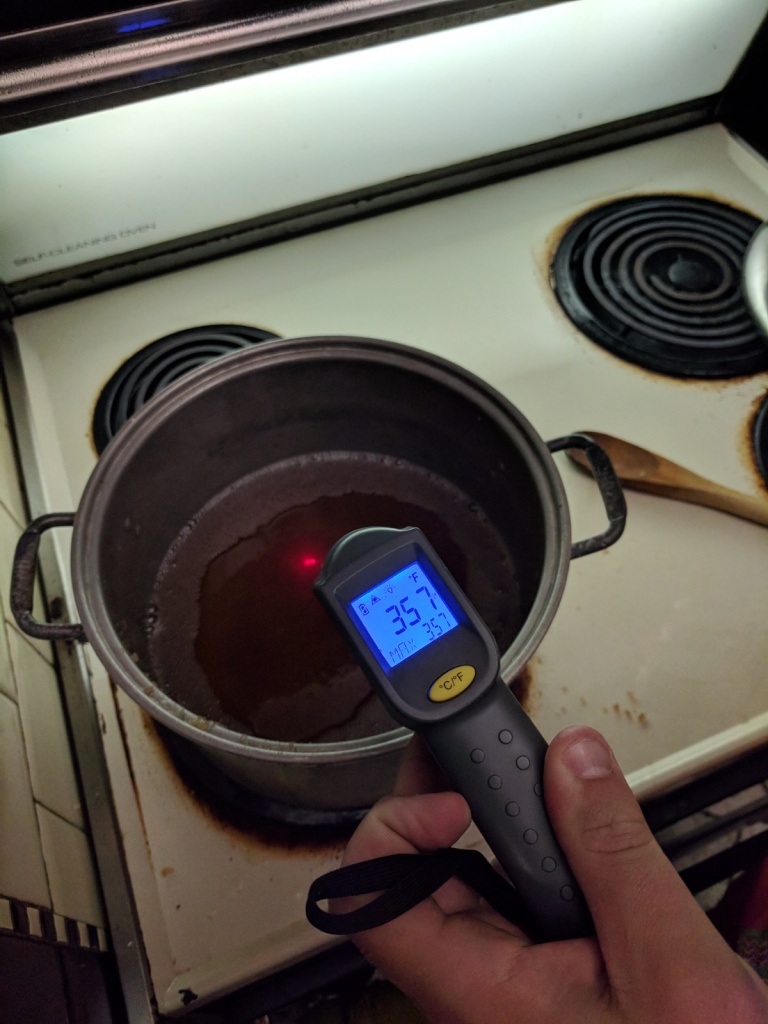 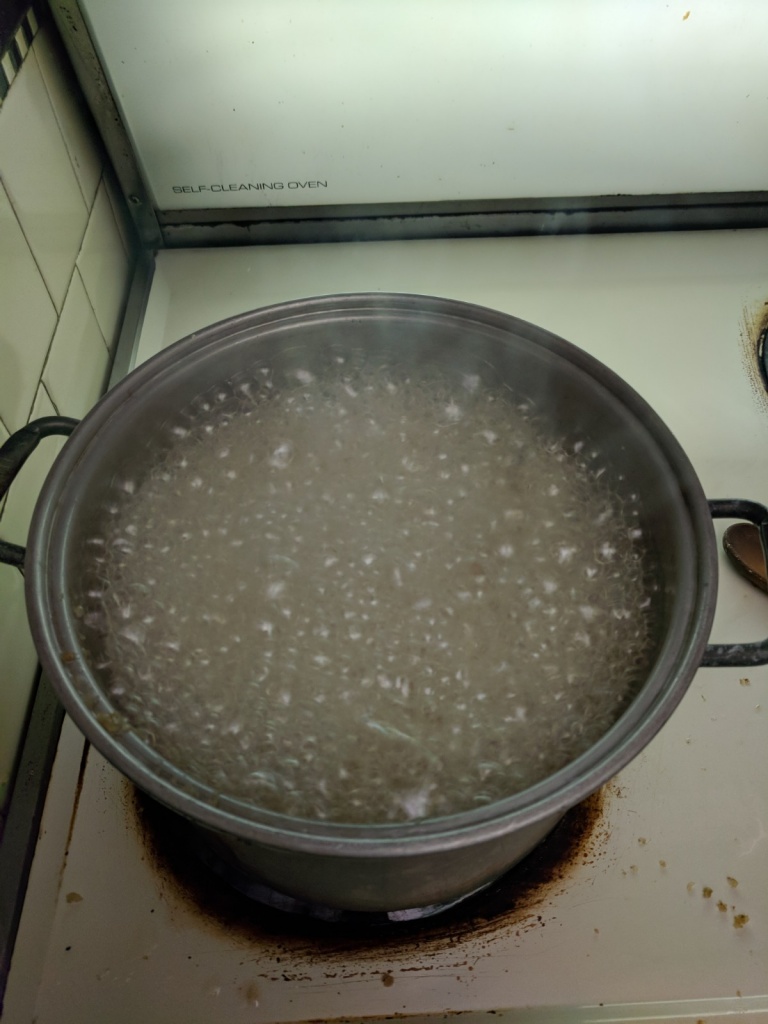 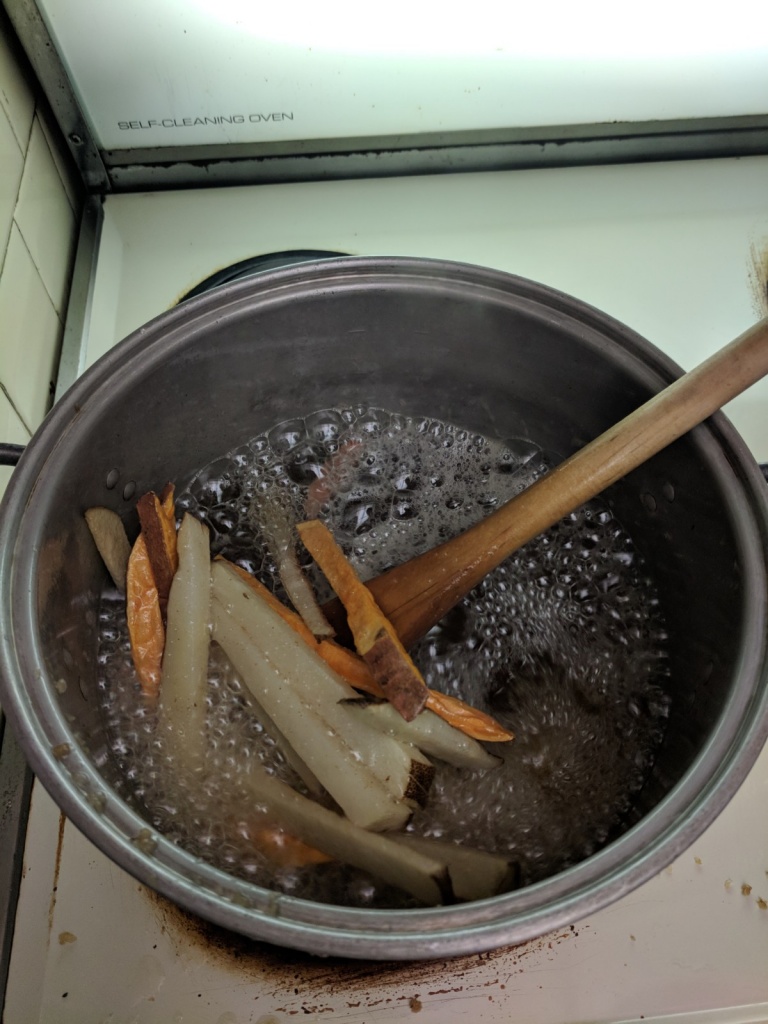 We noticed that the tallow (compared to the vegetable oil) bath seemed to lose temperature a lot faster when we put fries in. I think you want a large heat reservoir so it doesn’t change the temp much when you throw them in, but we had what we had. 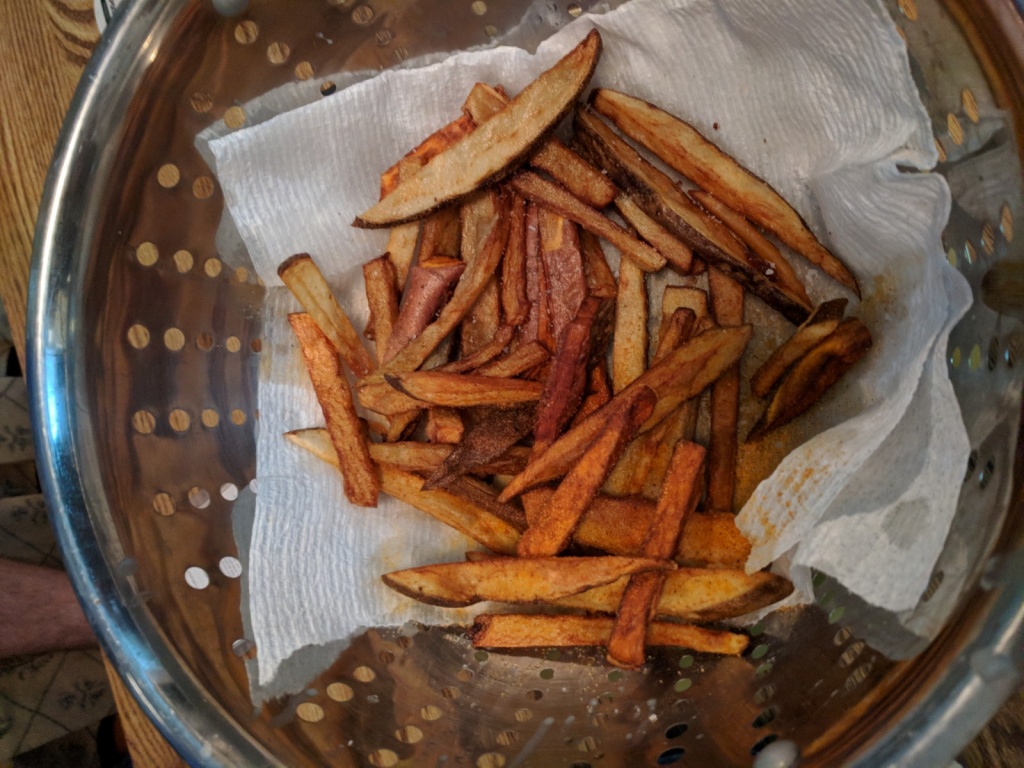 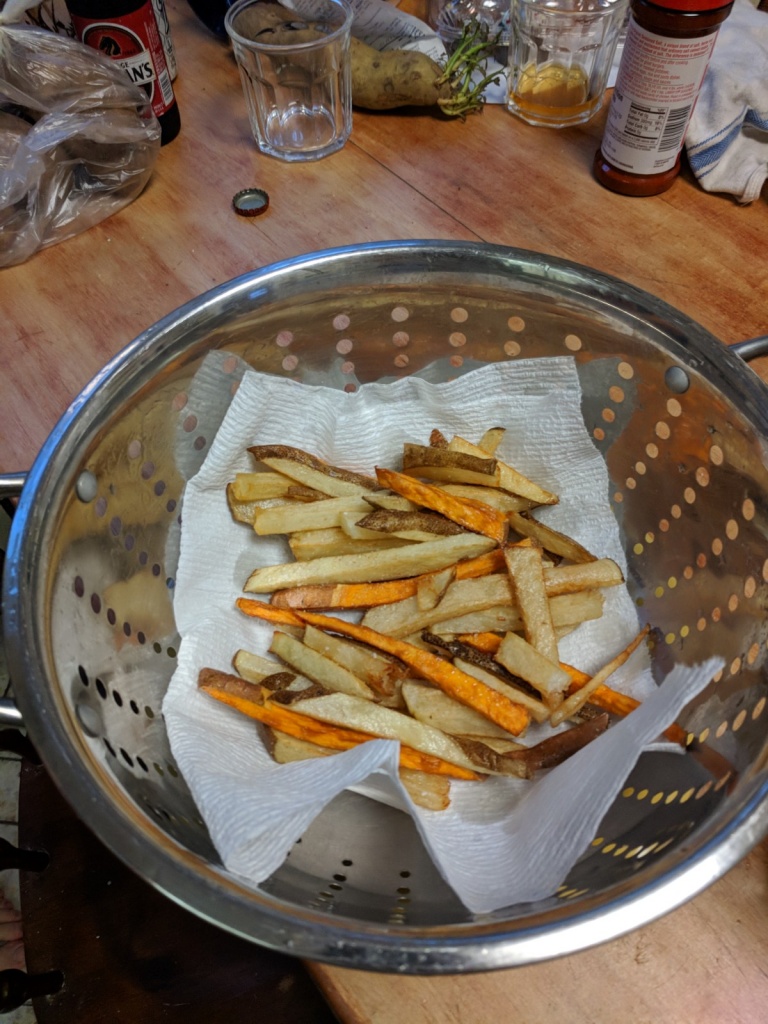 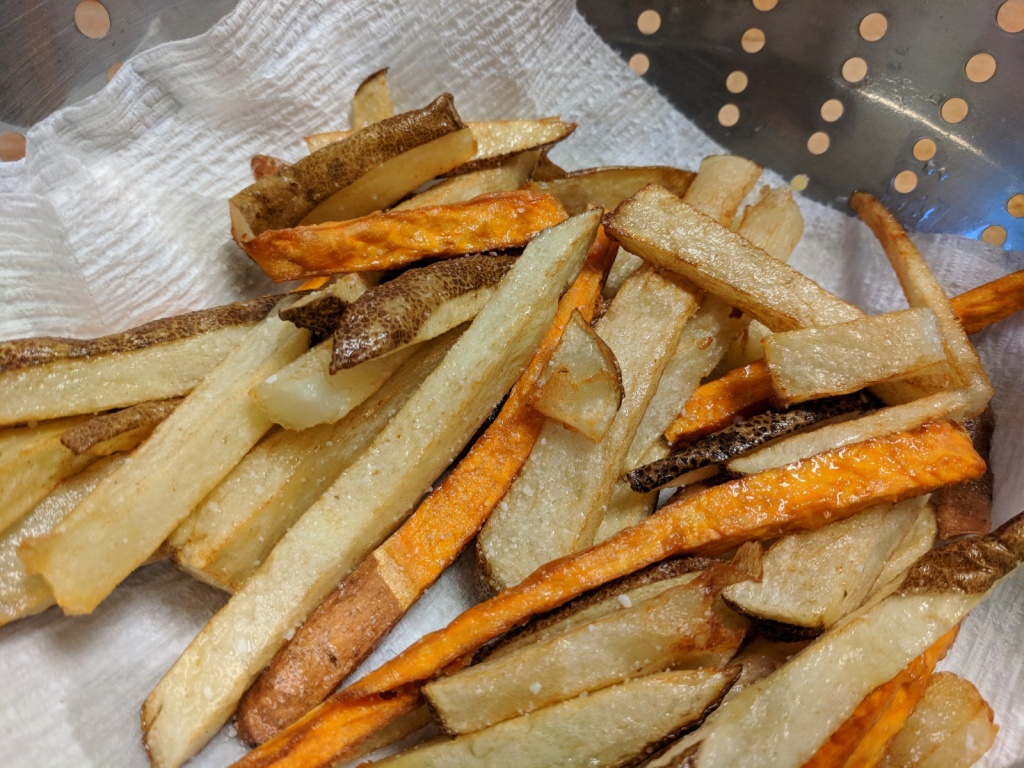 So, how were they?

They were…good. They were definitely fries I guess, but probably not worth a podcast. They did have a distinct taste though, kind of meaty.

We had actually already bought frozen fries before we got the potatoes, so we tried those too. We thought that they might actually work better since they’re frozen and that’s what they actually do in fast food places, right? Maybe they’re onto something? We tried them simultaneously with the vegetable oil and beef tallow to compare. 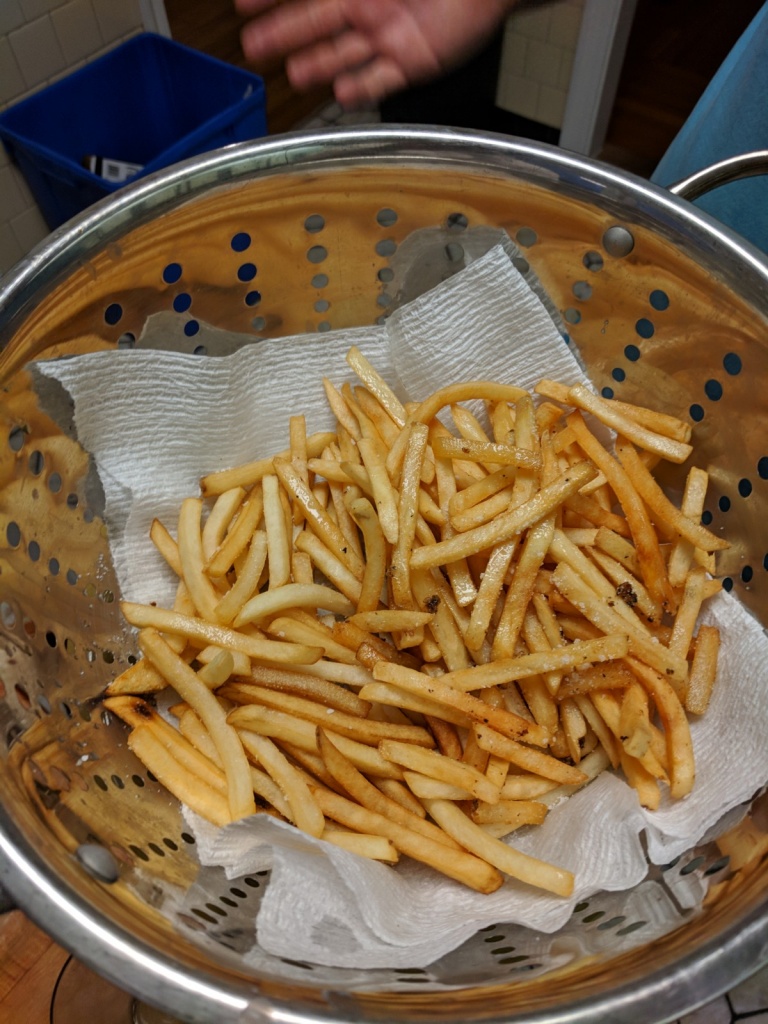 The beef tallow ones were noticeably better with these, but they were both definitely worse than the hand cut fries, which is comforting I guess.

I should also say: it’s entirely possible that we did something wrong. There are probably 20 other variables we didn’t have control of or think of. For example, maybe you really need a constant bath temperature (i.e., large bath), which we definitely didn’t. We kind of eyeballed the timing, but maybe we left them in way too long or not enough. Maybe we got gross tallow. Maybe we just didn’t boil the tallow itself long enough. Maybe we used sub-par potatoes. Who knows!

Lastly, during some brief Googling, I found this Reddit thread where people discuss/disparage the episode, and one person asked a good question: are there any restaurants that still do use beef tallow for fries? Apparently, yes:

So maybe I can try them made by a pro someday.

Fun with Genetic Algorithms and the N Queens Problem