I intended but forgot to write about this in past years, but this year I’m remembering!

The Fools’ Rules Regatta is a Rhode Island tradition and a total blast. You can read about it on their delightfully quaint site there, but in short: every year, on some weekend in mid August, there’s a boat race in Jamestown where teams bring tools and materials to a small beach, have two hours to build a small sailboat, and then race them. And this year, we won!

The boats are typically pretty silly, with goofy names, lots of funny decorations, and not exactly built for optimal sail speed. Here are a few examples: 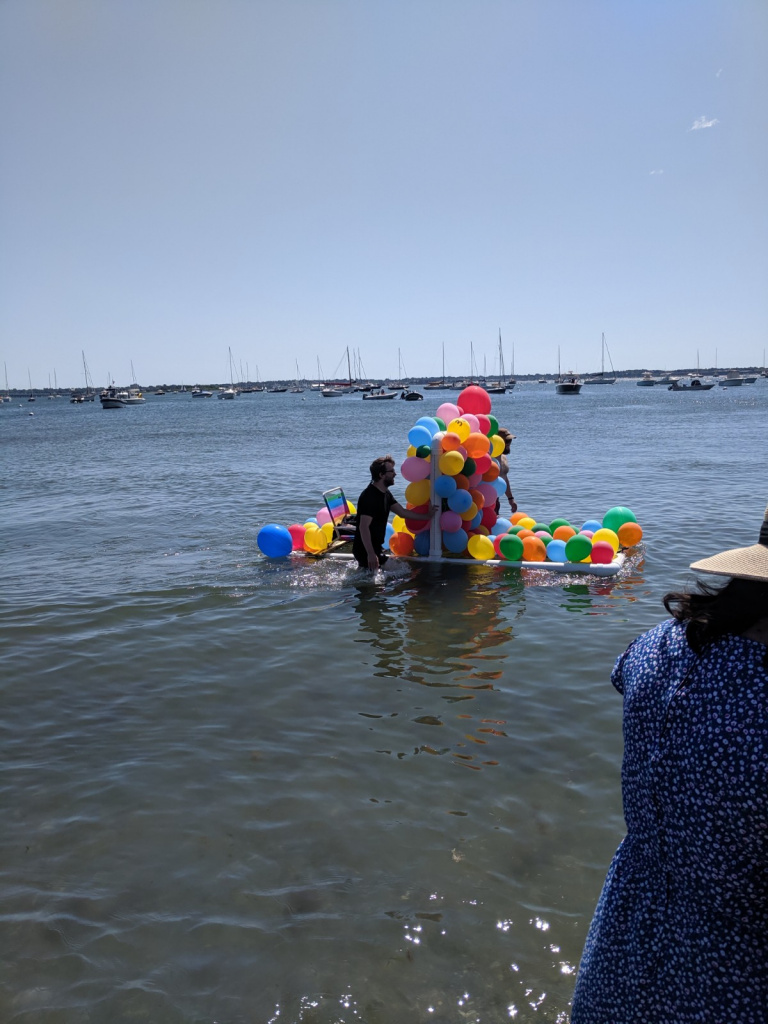 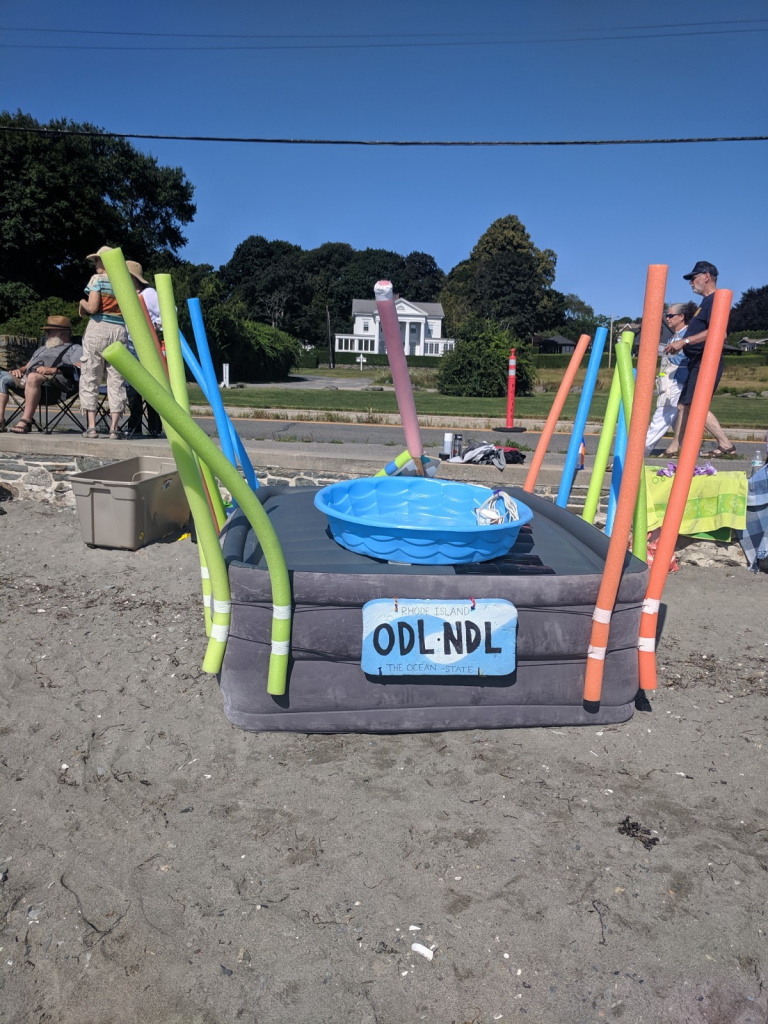 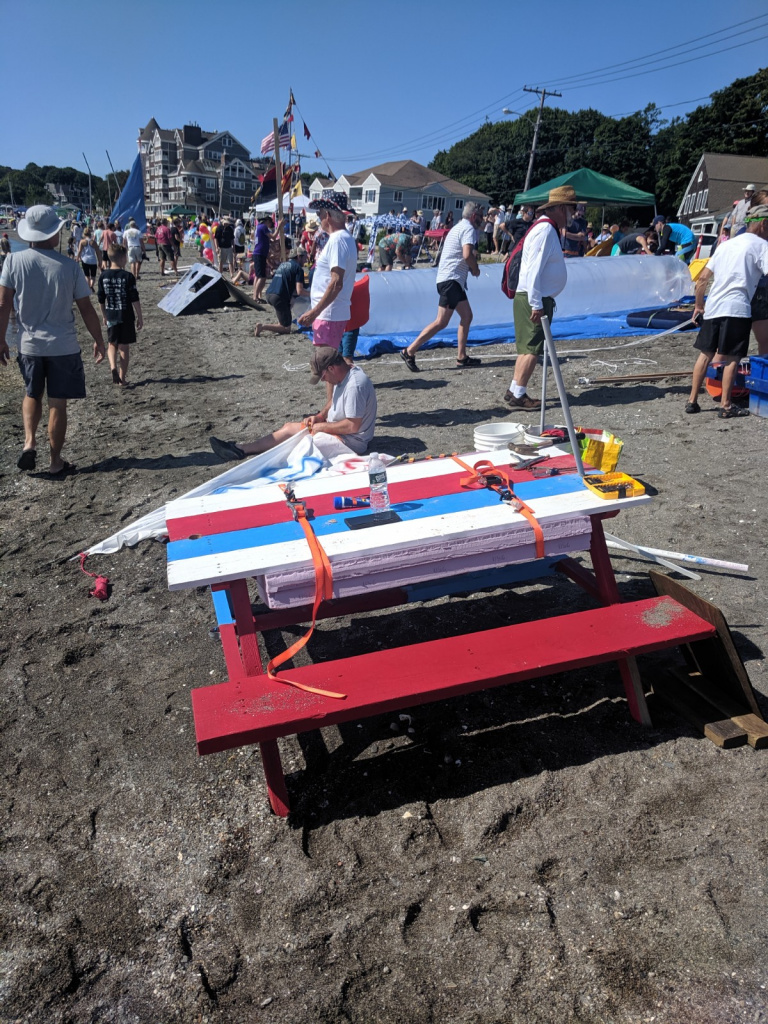 It’s a ton of fun! As you can see, a lot of people come just to watch both the build part and race. When the race is on, the beach is pretty packed. My friends and I originally heard about it because Max (who grew up in RI) did it as a kid. We first did it in 2016, and actually won our first time! But I’ll save that for a future post, and here focus on this year 😉

There are actually several races based on how many people are on the boat: 1, 2, 3, 4, or “unlimited”. We’ve always been in the unlimited class, with our group of five (me, Ben, Will, Phil, Bobby) actually the smallest group we’ve ever done. The 1 and 2 people classes are pretty free in what kind of boat design they do, and you often just see them (…mostly kids) on inflatable toys with a beach umbrella as the sail: 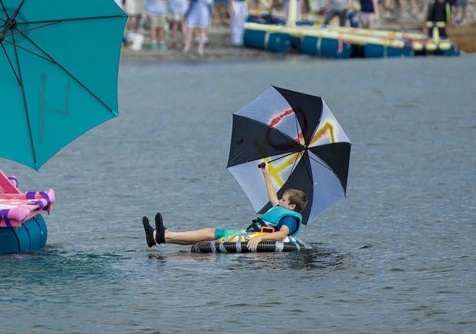 however, when you have to make a sailboat that can seat 5, with a proportionally big sail, it actually becomes a bit of a challenge!

We’ve tried a couple designs in the past. I think almost all the flotation designs we’ve seen for providing the buoyancy fall into one of two camps: either “closed” (like a PVC pipe capped at both ends, air mattress, or 55 gallon drum), or “open” (like a typical rowboat, where the top is open and you just hope you don’t let water over the side!). Closed flotation devices are nice if you can get them (e.g., you don’t have to worry about water getting over the edge), but they’re actually somewhat infeasible for a group of our size. For a group of even only 5 people, you have to provide a buoyant force (assuming you want to keep your body out of the water) in the ballpark of 800 lbs.

My intuition was that if you got one of those 4 inch diameter, 10 foot long PVC pipes from home depot, capped, it would provide a decent amount of buoyancy. Want to guess how much force you’ll get from one of those? Give it a try.

less than 55 pounds! So one of us hefty boys would need around 3 or 4 of those, each, and that’s not even counting the weight of things like the sail, rudder, anchor, etc. On top of that, there’s the practical matter of getting the supplies and people there! ~Twenty 10 foot pipes would be difficult. So that’s always been a challenge we’ve worked around.

Anyway, this year the credit goes to Will. The main idea was to make a frame, and then wrap plastic around it. This was nice because it let us quickly make it large, and quickly displace a lot of water. The night before, we quickly sketched it out, laid out some spare 2×4’s to get a sense of the size, and made a home depot run: 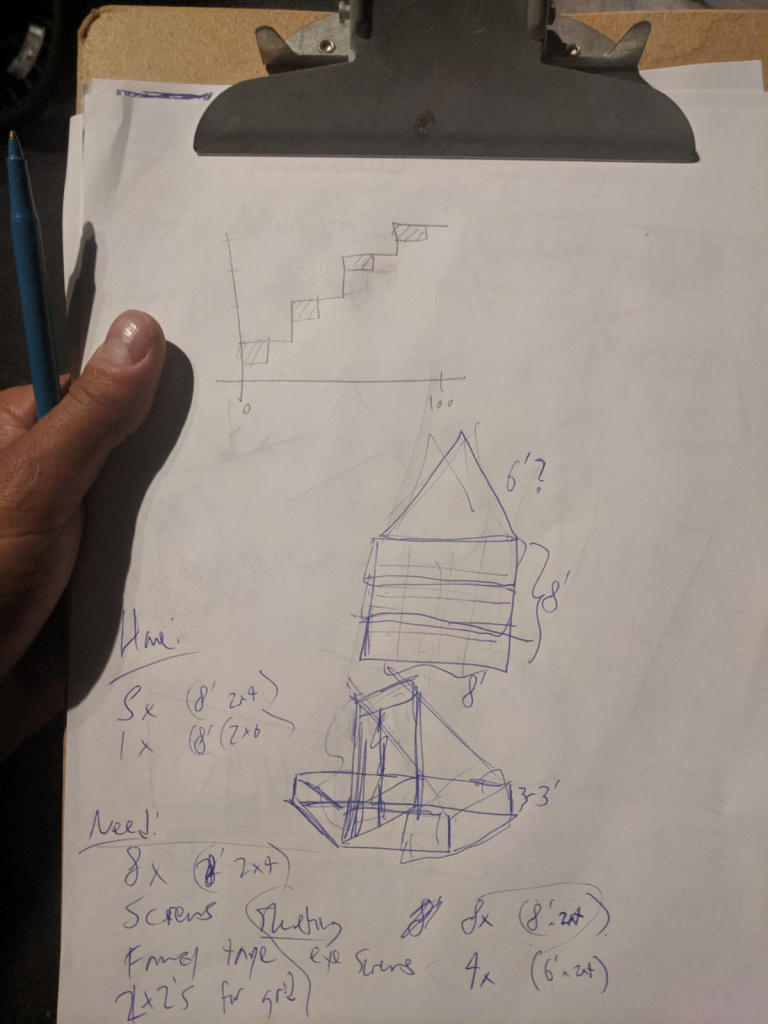 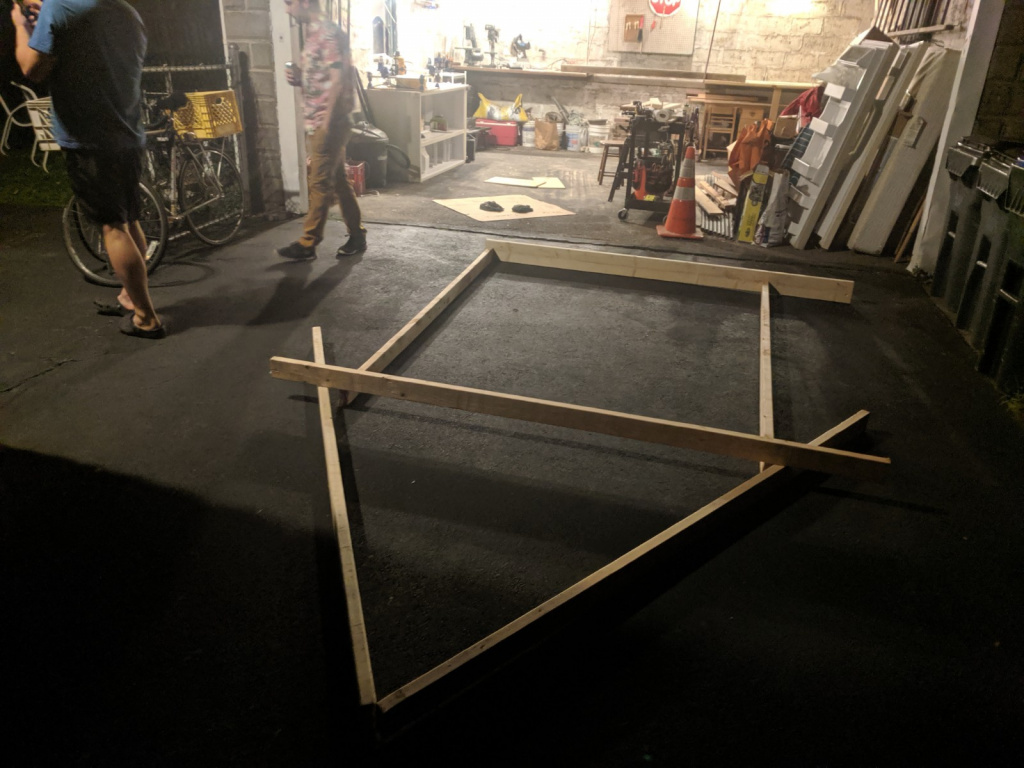 And you obviously need big bug eyes for the front: 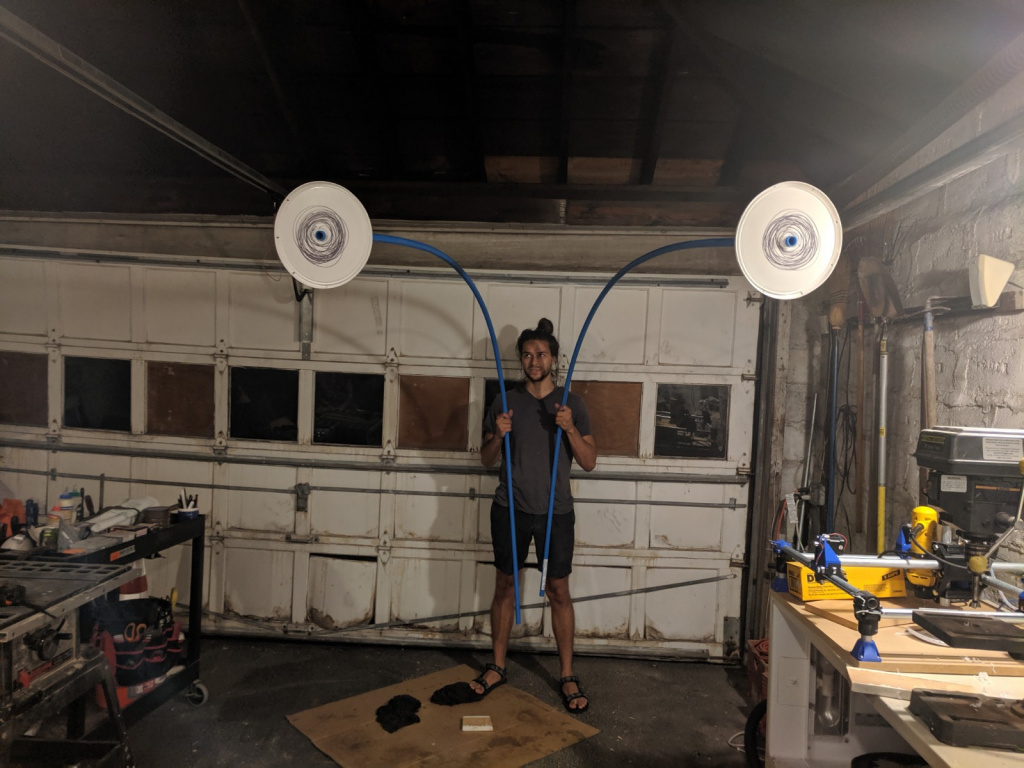 While in the past we made sure the design at least held together, we really winged (wung?) it this year, and just assembled it for the first time on the beach. The cannon went off, and we were building! 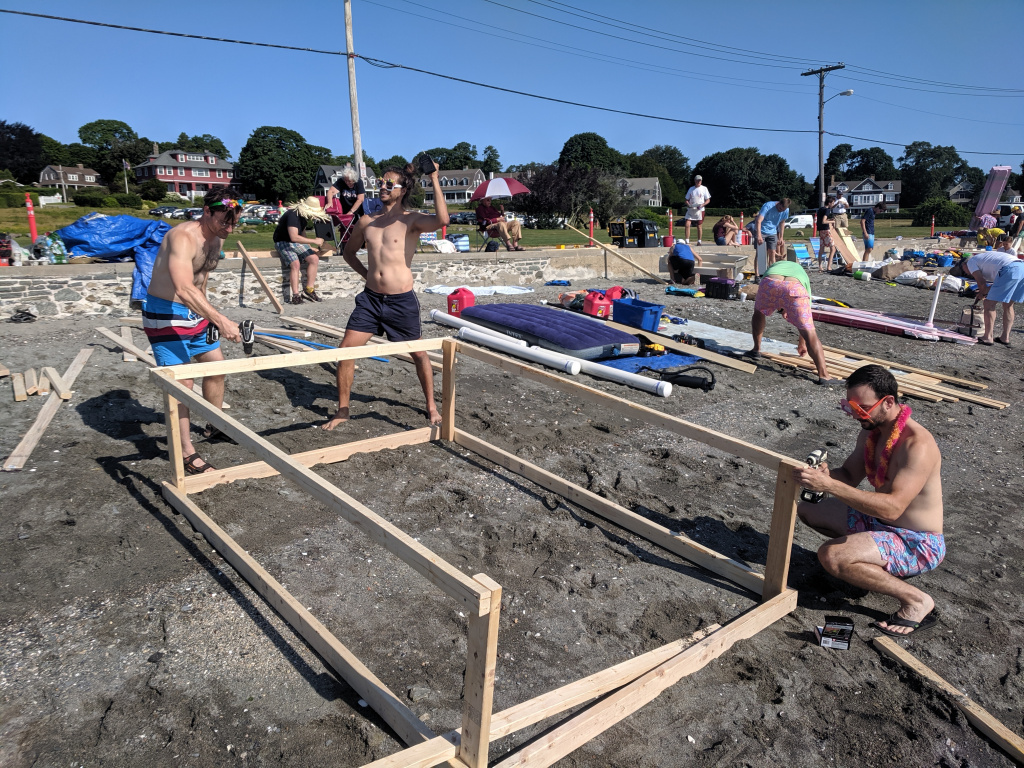 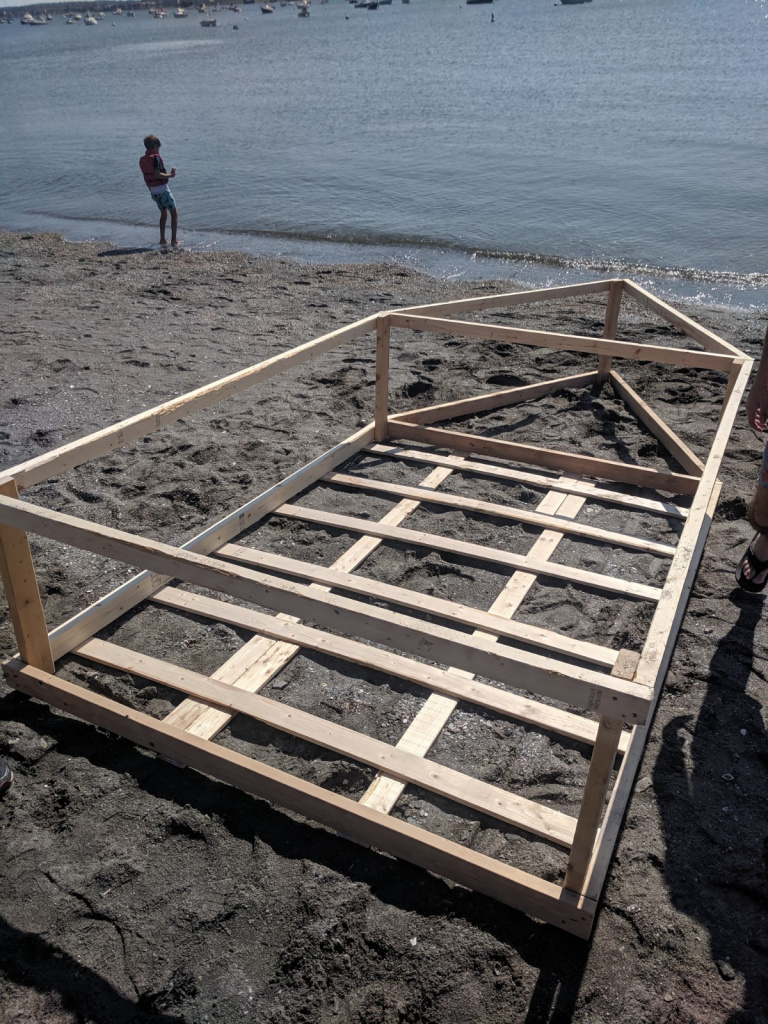 attaching the sail. We went for a “V” shape that allowed us to easily get some more width: 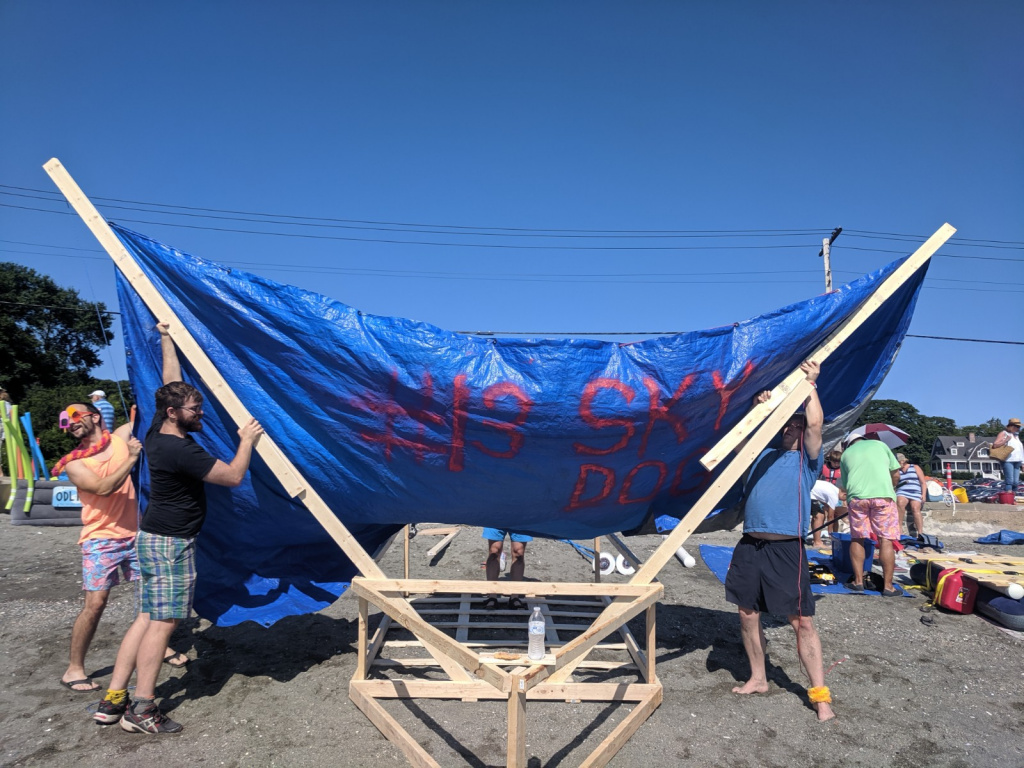 duct taping any sharp parts on the bottom (see results later!). At this point, we really could’ve seamlessly pivoted to building a small cabin: 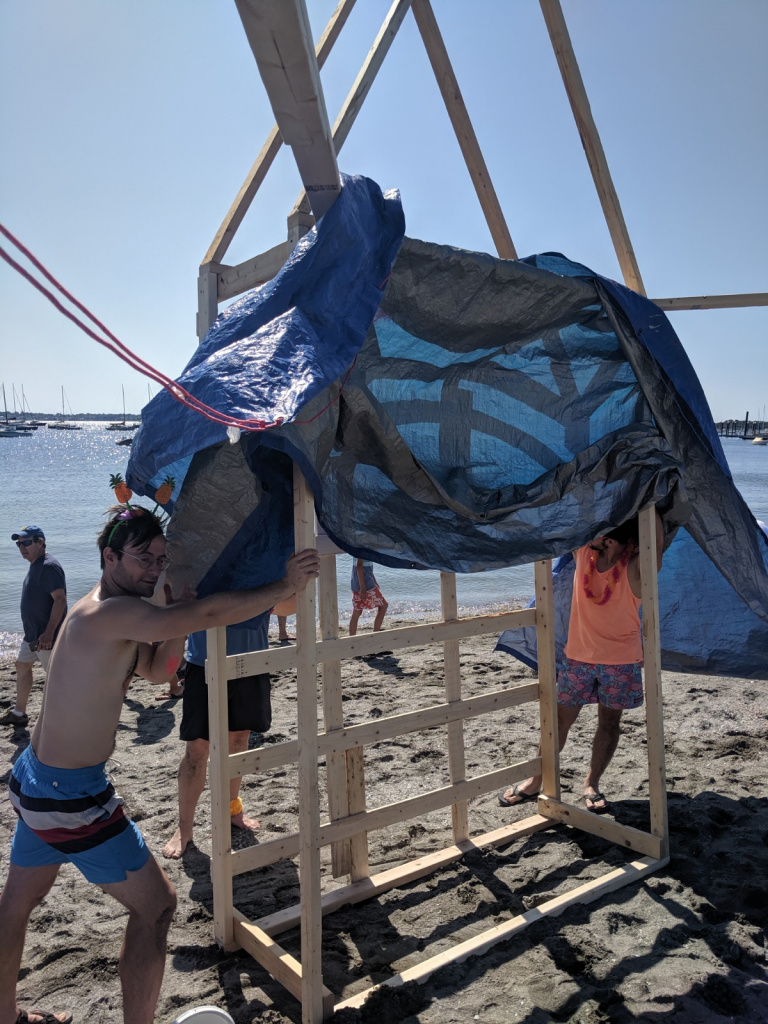 wrapping the plastic sheet (4 mil thickness) around the bottom, stapling it to the inside: 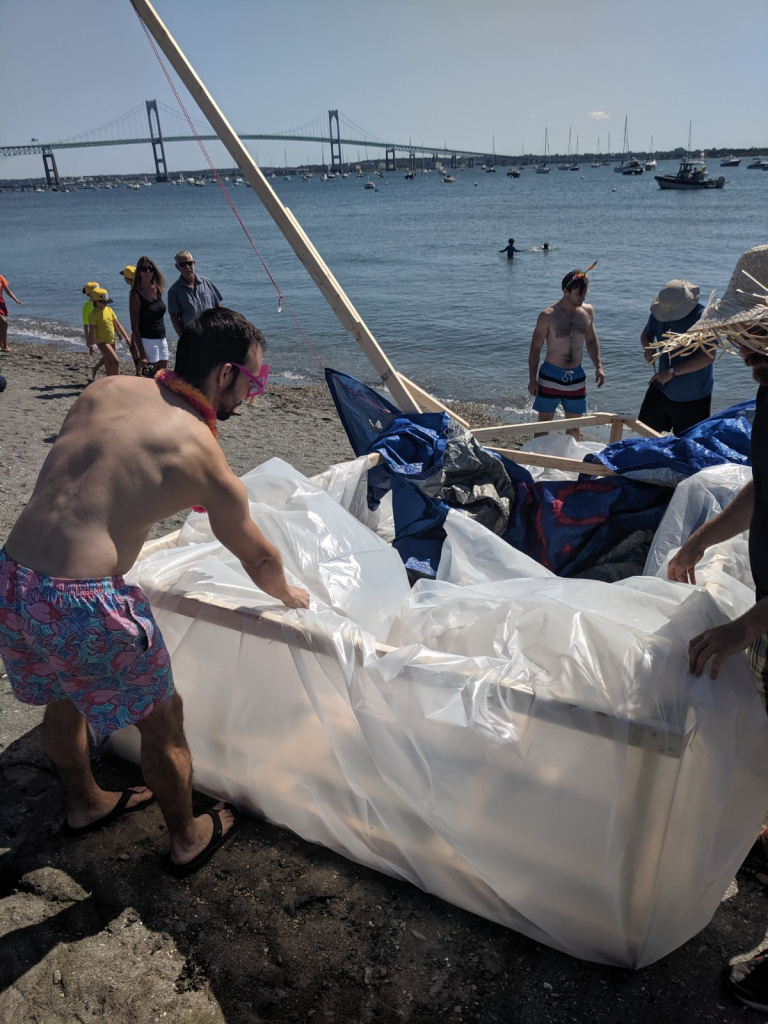 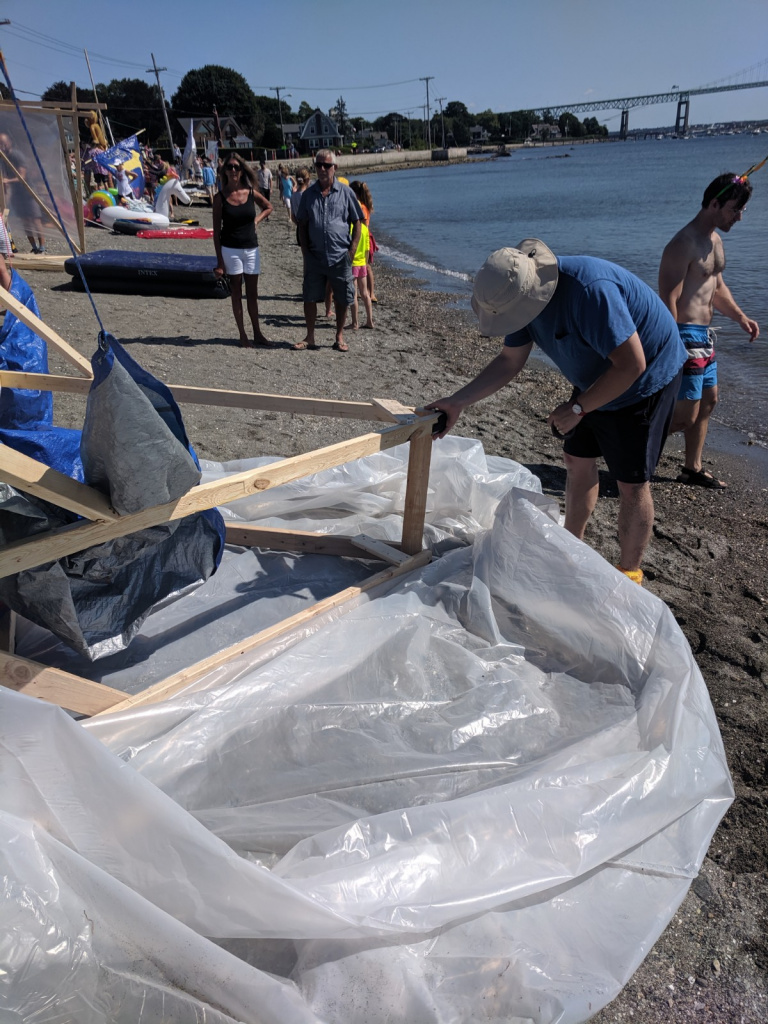 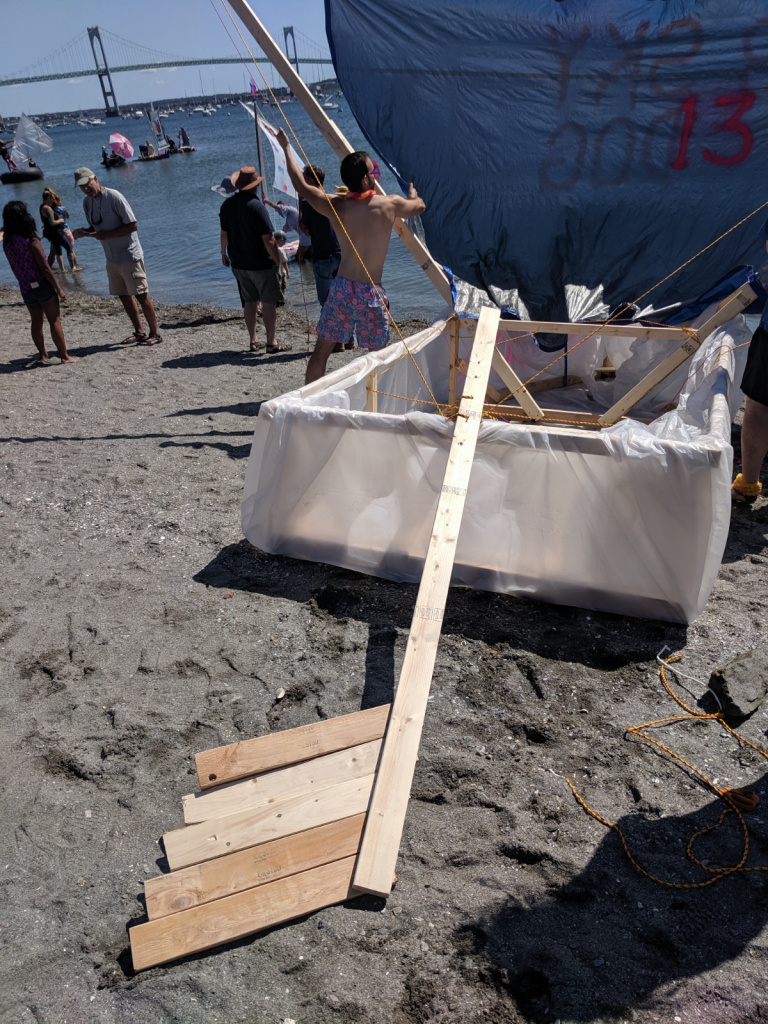 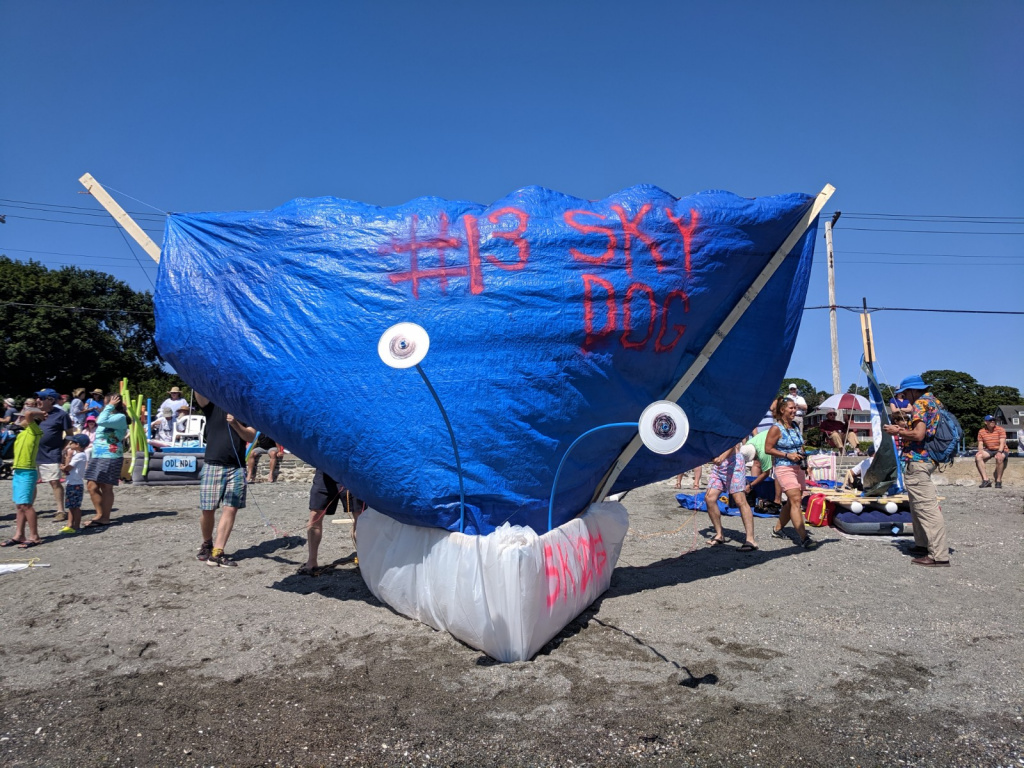 this is the ideal boat. You may not like it, but this is what peak performance looks like 😛

As for the race itself… well, this was a funny one. It’s not a long race, just about 200 feet along the beach. However, this year, the wind really wasn’t cooperating, and it was pushing everyone just…out to sea. If you had a real sailboat, you could probably tack and still go in your intended direction, but… well, you’ve seen these boats.

By the end, most of the teams had to get towed back in by motorboats, because all the boats had been driven about a quarter mile out from the shore and were starting to get too close to actual nice sailboats! It’d be a pity if a half million dollar sailing yacht got sunk by a trainwreck of 2×4’s and drywall screws.

So to be honest, we didn’t know why we won! We definitely didn’t cross the finish line, and I’m pretty sure no one did. One team was a group of a bunch of little kids dressed as “minions” on a “minions” boat, and their parent was just pushing them in the shallow water, so they might’ve gotten to the end. I prayed to any god that would listen that they wouldn’t win, partly because they were cheating and partly because of their theme.

But the important thing is that we won, and winning means you get a FREE BUCKET OF ICE CREAM. It’s twenty scoops, and even 5 hungry boys had to admit defeat here. 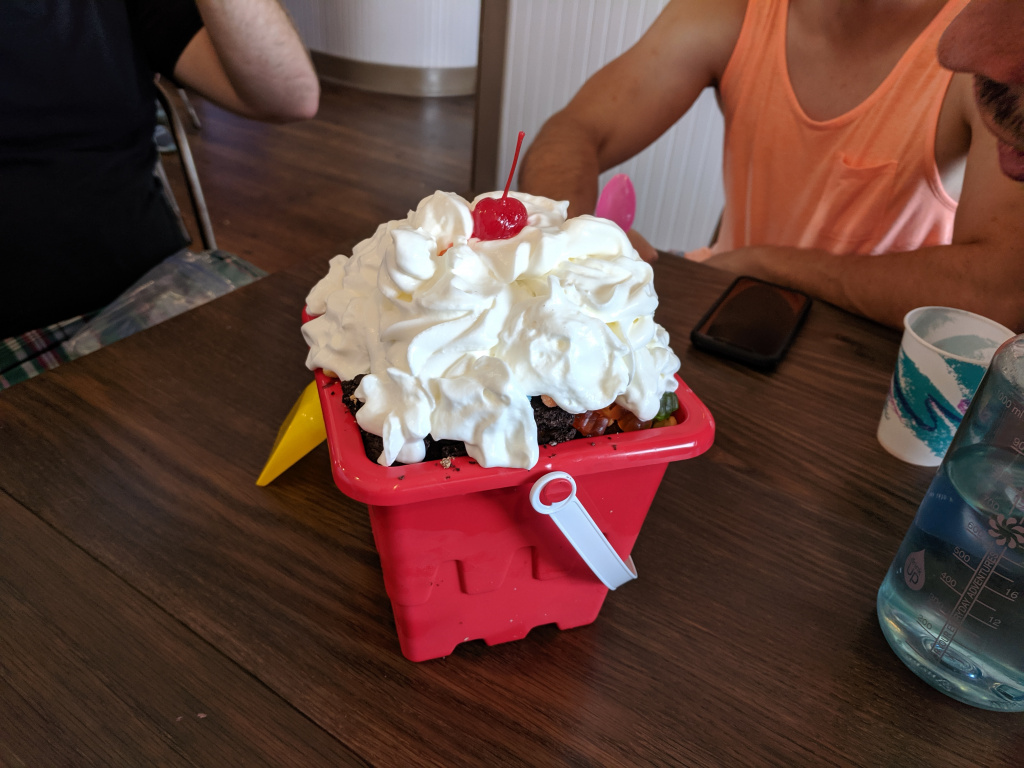 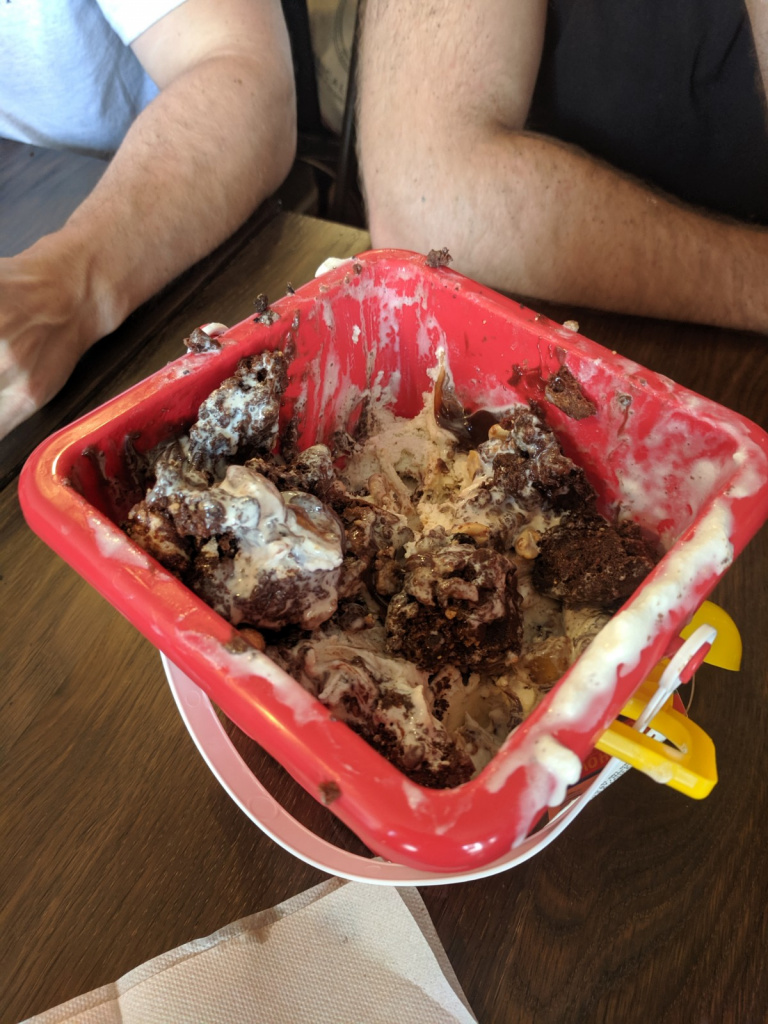 Lastly, while on the boat, the bottom plastic was bulging up real taut, and poking it with our feet, it felt like it was pretty high pressure. It never popped, but we were real curious if it would make a crazy geyser if it did. So at the end, we did the usual tradition of “stress testing” (read: destroying) the boat in shallow water, and poked a gash in it: 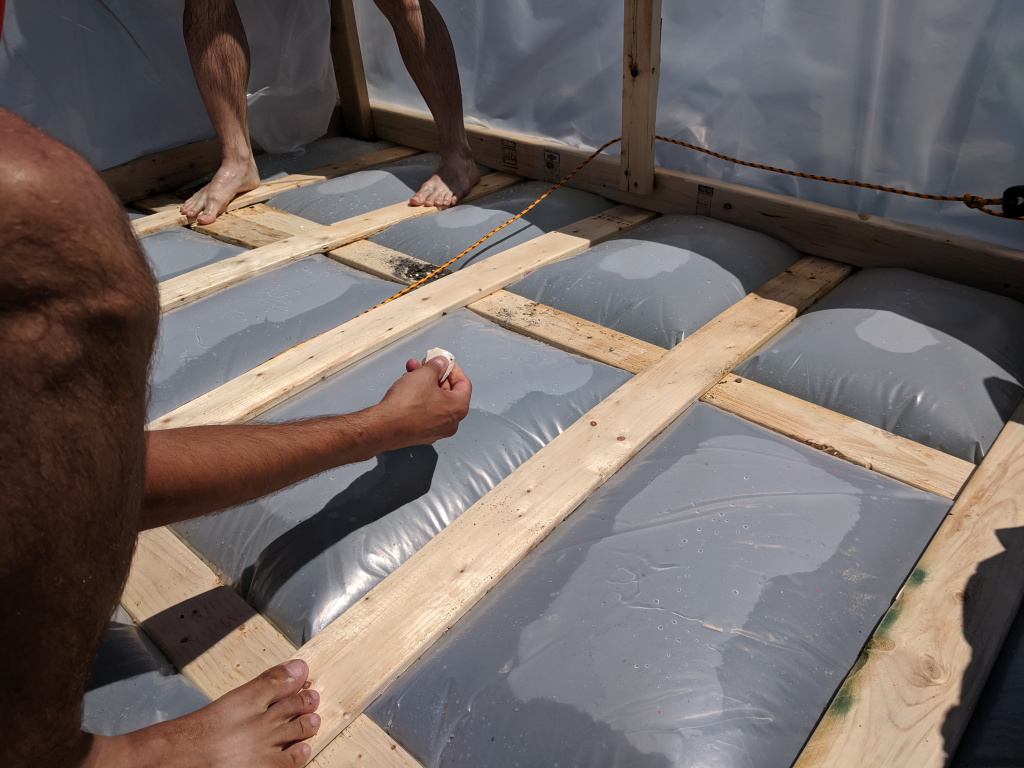 Surprisingly, nothing! It basically dribbled out. Even with a hand-sized gash in it, it was only very slowly adding any to the bottom, and we definitely could have finished a race like that.

There were some other cool ones this year. This team used aluminum extrusion, and had a really interesting parachute-style sail with an intricate looking mast: 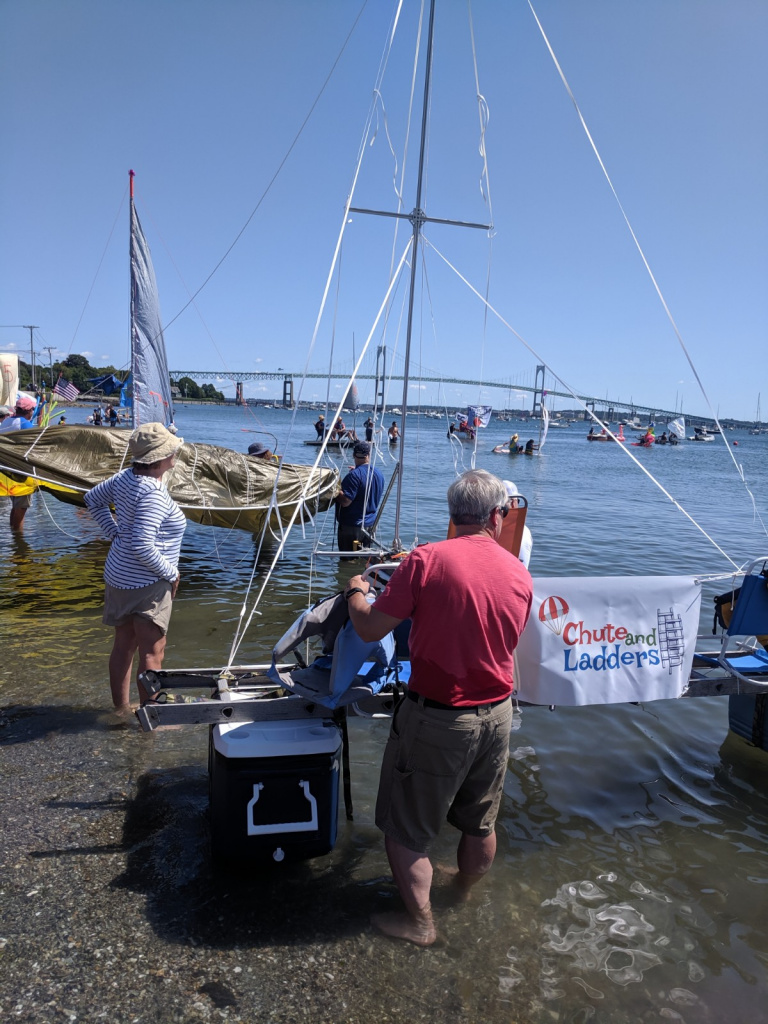 This was another unlimited-class team, and they managed to get a ton of flotation from these huge plastic sheet tubes, that I didn’t even know existed! 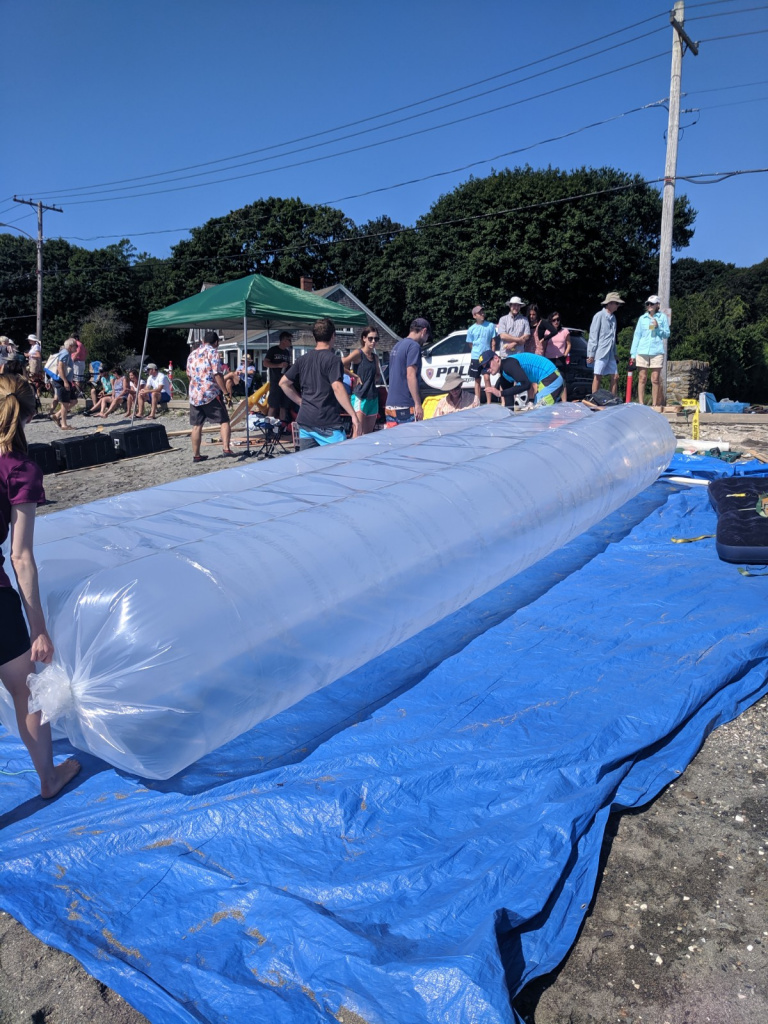 very clever. I was most worried about them beating us, but they had pretty bad luck with the wind and ended up waaaay out there. 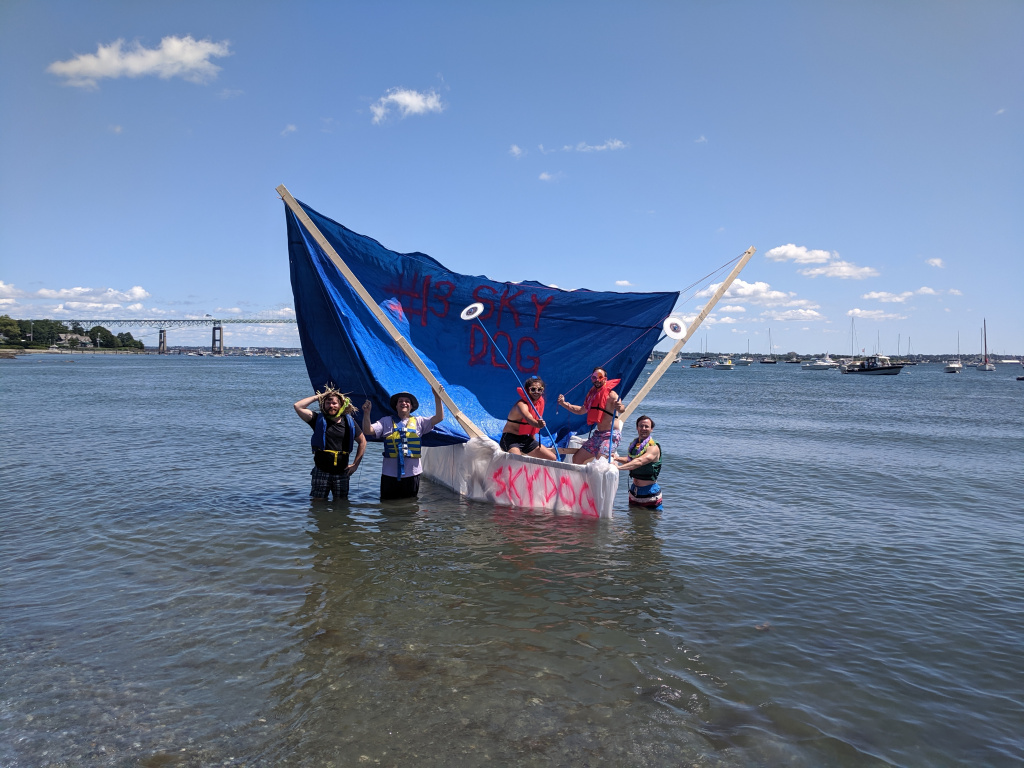 What a time. Next year!

Albania, Montenegro, and Croatia: if you’re balkin’, don’t be!

A little catchup: the slow boat and beginning of Luang Prabang